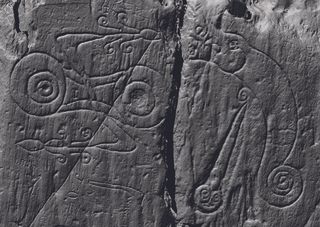 A laser scan image of the Pictish symbols carved at Trusty's Hill, which prompted archaeologists to study the site and discover an early medieval fort.
(Image: © copyright DGNHAS / CDDV)

The heart of a lost Dark Ages kingdom may have been discovered in southern Scotland.

A new book, "The Lost Dark Age Kingdom of Rheged" (Oxbow Books, 2016), tells of the inadvertent discovery of a set of fortifications dating to about A.D. 600 on a rise called Trusty's Hill in Galloway overlooking Fleet Valley. The discovery came as part of the Galloway Picts Project, an effort launched in 2012 to study carvings left by a people called the Picts, who lived in Scotland until the early medieval period and were eventually absorbed by other Gaelic cultures.

(The Dark Ages is a term for the early Middle Ages, or about A.D. 500 to A.D. 1000, so named because it was long thought of as a culturally limited period when "barbarians" were moving into the crumbling Roman Empire. Scientists have recently challenged this negative view of the era, however.)

Pictish carvings had been found on Trusty's Hill, far south of where such carvings were typically discovered. Archaeologists led by the private firm GUARD Archaeology excavated at the site beginning in 2012 and discovered timber and stone fortifications, a royal hall and a smith's workshop. The structure, according to the archaeologists, was what is known as a "nucleated" fort, a stronghold from which the local royals would have ruled the surrounding countryside. The spot, they say, was likely the center of a lost kingdom called Rheged, the dominant kingdom in northern Britain until the seventh century. [The 25 Most Mysterious Archaeological Finds on Earth]

"The people living at Trusty's Hill were not engaged in agriculture themselves," excavation co-director and co-author of the new book Christopher Bowles, an archaeologist with the Scottish Borders Council (the governing body in that part of Scotland), said in a statement.

"Instead, this household's wealth relied on their control of farming, animal husbandry and the management of local natural resources — minerals and timber — from an estate probably spanning the wider landscape of the Fleet Valley and estuary. Control was maintained by bonding the people of this land and the districts beyond to the royal household, by gifts, promises of protection and the bounties of raiding and warfare," Bowles said.

The Dark Ages people who fortified Trusty's Hill used the natural topography to their advantage. The lower slopes had been enclosed with defenses and the top was lined with a stone-and-timber rampart. To climb to the top of the hill, people had to pass through a rock basin and an outcrop carved with Pictish symbols, where royal inaugurations probably occurred, the archaeologists reported. This ceremonial entrance looks similar to one at Dunadd, the center of the early Scots kingdom of Dalriada, the researchers said, hinting that it had a similar role in royal ceremonies.

A great hall was found on the west side of the summit of Trusty's Hill, and a master smith's workshop was slightly lower on the east side of the summit, according to GUARD Archaeology. The shop would have produced metalwork of gold, silver and bronze. Researchers analyzed a lead ingot found at the shop and discovered that it came from southwest Scotland, indicating the source of some of the civilization's raw materials.

Excavations also revealed signs of wool-spinning and plenty of feasting, mostly on cattle, oats and barley.

The researchers aren't sure of the meaning of the Pictish symbols that led to the entire excavation, and they may never know. But their presence at the site indicates the connections between Scottish kingdoms in the early medieval era, the archaeologists said.

"There is no Pictish Rosetta Stone," said book co-author Ronan Toolis, the commercial director of GUARD Archaeology. "But they [the pictograms] provide significant evidence for the initial cross-cultural exchanges that forged the notion of kingship in early medieval Scotland."

The fort at Trusty's Hill was destroyed with fire in the seventh century, the researchers reported — something that was evident from the stone ramparts, which had undergone vitrification, or fusion, under extreme heat. Because this sort of fiery demise requires time and extra fuel, the fort was likely destroyed deliberately by an enemy force, according to the Galloway Picts Project.