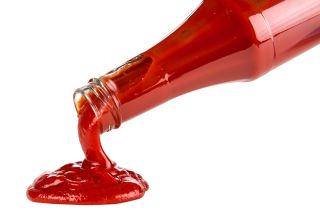 If you've ever tried shaking ketchup out of a bottle, only to get more of the sauce on the table (or yourself) than on your fries, then you know the struggle is real. But now, a physicist has figured out the secret to spatter-free enjoyment of the popular tomato condiment.

The reason ketchup can be so difficult to get out of a bottle (that is, until an avalanche of sauce comes pouring out) is because ketchup is what's known as a "soft solid," and it moves only when the right amount of force is applied. According to scientists at Heinz — the originators of ketchup and its glass bottle — the optimal flow of ketchup is at 147.6 feet (45 meters) per hour. As such, the common method of tapping or whacking a ketchup bottle to encourage the sauce to come out is necessary, but what's the best way to keep the splatter at bay? [The Mysterious Physics of 7 Everyday Things]

The answer lies in understanding rheology, which is the study of these soft solids, said Anthony Stickland, a senior lecturer in the University of Melbourne's School of Engineering. There are three simple steps to getting ketchup out of the bottle without the mess, Stickland said in a statement.

Step one: shake. With the lid on, shake the ketchup bottle to mix the contents, Stickland said. Not only does this ensure that you don't have a watery sauce at first, it also helps spread the solid particles evenly through the mixture to ensure a smooth flow.

Step two: turn the bottle upside down. This act simply gets the condiment to the lid, ready to exit the bottle, he added.

Step three: tilt and pour. This is the tricky part, Stickland said, because if you apply too much force, you could be covered in sticky red sauce, but if you don't apply enough, the ketchup will stay comfortably in the bottle. The right amount of force depends on how much sauce is left in the bottle, according to Stickland. A full bottle flows more easily, because the weight of the sauce pushes down when the bottle is tilted. If you have a bottle that's nearly empty, on the other hand, you'll need to apply more force, he said.

"Start by pointing the open end of the bottle toward your food at an angle of around 45 degrees with one hand around the bottle neck, and the other delivering gentle but firm taps on the bottom of the bottle," Stickland said. "Increase the force of the taps until you balance the force applied with the mechanical strength of the sauce in order to get it to flow."

The key is that "sweet spot" where the amount of force you apply in tapping the bottle encourages the sauce to slow without the splatter, Stickland said. With science — and patience — even the most stubborn of ketchup bottles can be tamed.