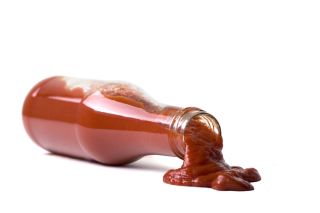 An alleged counterfeit condiment operation blew its cover, literally, when exploding bottles of repackaged Heinz ketchup became hard to ignore for the other tenants of a New Jersey warehouse.

Preliminary investigations from Heinz officials show that the Dover, N.J., operation had a simple ploy in mind: Purchase bulk quantities of traditional Heinz ketchup, transfer the sauce via large bladders into individual containers labeled "Simply Heinz," one of the company's premium recipes, then shunt the result off to unwitting consumers at a cushy markup.

The backers of the ill-fated ketchup syndicate have not yet been identified, but there's another mystery beneath the lurid headlines: Why did the bottles, which allegedly contained an ordinary, shelf-stable Heinz variety, begin to explode in the first place? What's keeping an average person at a diner counter from becoming the next victim of a spontaneous ketchup detonation?

It's not yet known whether the ketchup schemers adulterated the traditional Heinz recipe with contaminating additives or fillers, but even if they didn't, the simple act of moving the condiment from one container to another would likely have been enough to lay the groundwork for explosions, according to Rutgers University food chemist Thomas Hartman. [Stuck Ketchup Problem Solved by MIT Engineers]

"When you get expansion and containers blowing up like that, a lot of the time it's from gas buildup within the container, and that's usually a red flag for microbial growth," said Hartman. "By transferring the ketchup from one container to another, they could have breached the [containers'] sterility."

The reason you're unlikely to hear about unopened ketchup bottles blowing up on pantry or supermarket shelves, even if they've been there for years, is because the product has been heated in the factory to kill microbes before being packaged. When the seal is breached, carb-hungry microbes can move in and start building pressure inside a bottle as they convert their feast into gas.

Refrigerating ketchup stifles microbial growth after the bottle has been opened, but unrefrigerated bottles of ketchup are a common sight at restaurants and in the homes of people who don't like cold ketchup on hot fries. So why don't these bottles explode like the ones in New Jersey?

In the right conditions, especially unusually warm ones, they could. But Hartman says ketchup explosions are not normal occurrences in diners and homes partly because the bottles are opened frequently, so pressure doesn't have a chance to build up.

It's not clear how long the exploding ketchup bottles were left sealed in New Jersey, but Heinz investigators say the site of the operation appeared to have been abandoned before the project came to fruition. And if the thousands of phony bottles had been exposed to elevated temperatures while they sat in the warehouse unattended, microbes would have been given a boost in overcoming ketchup's growth-retarding acidity.

A Heinz spokeswoman told ABC News that the company has no reason to believe any of the counterfeit ketchup reached market, but if New Jersey grocers start reporting ketchup eruptions, science will point back to a warehouse in Dover.