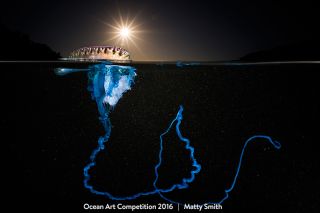 A dramatic Pacific man-of-war framed against a deep black sea is the subject of one of the winning photos in this year's Ocean Art Underwater Photo Competition.

Organized by the Underwater Photography Guide, the contest names 95 winners a year in a variety of categories, from reefscapes to cold water to nudibranchs, the marine mollusks known for flashy colors and strange body structures.

This year is the contest's sixth, and the top "Best in Show" prize went to a photo called "Blue Lasso" by Matty Smith. The photo, which also won the top prize in the wide-angle category, was shot in Bushrangers Bay in New South Wales, Australia. It shows a Pacific man-of-war (Physalia utriciulus) with its single deadly tentacle looped into a lasso-like "O" beneath the water. Man-of-wars are siphonophores, meaning that although they look like one animal, they're actually several polyps working together as a single organism. [See the Winning Underwater Photography Photos]

"It was one of those rare moments when it all came together for me, the fortunate photographer, I knew I had just witnessed something very special," Smith wrote about the winning entry.

Pacific man-of-wars are slightly smaller than their more famous Portuguese man-of-war cousins. Their stings are also milder, according to the Western Australian Museum, and their venom less likely to be fatal to humans.

First prize in the Pool/Conceptual art category went to a stunning shot of a rescued turtle at a rehabilitation center in Far North Queensland, Australia. The turtle, nicknamed Eva, snaps a tasty squid; the blurred background and color contrast were added in post-production, according to photographer Christian Miller.

The winning nudibranchs shot shows two mating mollusks in a squishy embrace near Tulamben, Indonesia. Photographer Rafael Cosme had his wife pose in the background, shining a diving light toward the beige-and-purple couple.

The Cold Water winner seems to stare out of the photograph with defiance. The subject is a pike in Skällinge, a lake in southwestern Sweden. A world away, the Reefscapes category winner features a sprawling blue sea star captured on film in Lembeh, Indonesia.

Photographer Scipione Mannacio Soderini took home the Mirrorless Macro prize for a photograph of a blue ring octopus (Hapalochlaena) — the first he'd ever seen in the wild. These octopuses have a venom-filled bite capable of killing a human.

Thousands of photographs from more than 60 countries were entered in the competition. Prizes included free sea cruises, dive packages at tropical resorts and gift certificates to the underwater camera store Bluewater Photo.