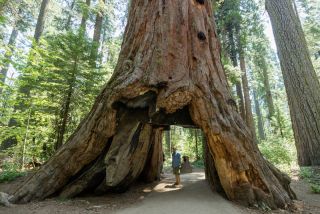 Oh how the mighty have fallen.

An iconic California tree with a hole big enough to drive a car through has died. The tree, which stood in Calaveras Big Trees State Park, had lasted 137 years with a giant hole drilled through its base. In the end, however, a massive winter storm caused it to tumble on Sunday (Jan. 8).

"This iconic and still living tree — the tunnel tree — enchanted many visitors," the Calaveras Big Tree Association posted on Facebook. "The storm was just too much for it."

The "Pioneer Cabin Tree" was a giant sequoia that had a hole hollowed out of it in the 1880s. The tree's base — about 33 feet (10 meters) in diameter — had a fire scar that made carving out the rest easier, The Washington Post reported. At one point, automobiles had passed through its base, though in recent years, only hikers were allowed through it, the San Francisco Chronicle reported.

Though the base had been drilled through, the tree still sported a few green shoots, proof that it was still alive. However, in the end, the drilling may have contributed to its demise. Wildfires frequently race through the Sierra Mountains where sequoias live, and the trees' bark is made to slowly heal over such fire scars. By drilling through it, people may have slowed or inhibited that healing process, according to the Chronicle. Although the age of the Pioneer Cabin Tree is not clear, giant sequoias are some of the oldest trees in the world and can live more than 3,000 years, according to the National Park Service (NPS). Many other giant sequoias in the park were more than 1,000 years old, the New York Times reported.

"It was barely alive, there was one branch alive at the top," Joan Allday, a volunteer at the park, told the Chronicle. "But it was very brittle and starting to lift."

The roots of the tree only extended 2 to 4 feet (0.6 to 1.2 m) into the ground, while the rain-sodden ground around it may have helped those roots dislodge from the ground, Allday speculated.

Editor's Note: This story was updated to correct the day that the "Pioneer Cabin Tree" fell. It fell on Sunday (Jan. 8), not Saturday (Jan. 7).