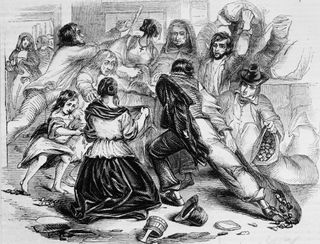 The potato blight that killed about a million people in Ireland in the 1840s originated in South America, a new genetic analysis finds.

Until now, the origin of the fungus-like blight that devastated potato crops in Ireland and throughout Europe had not been pinned down. Now researchers at North Carolina State University and the Norwegian University of Science and Technology Museum say the blight was caused by a pathogen with a particular genetic lineage, dubbed FAM-1.

The researchers conducted a new analysis of 183 samples of this pathogen, the oldest dating back as far as 1941. They found that the genetic strain that caused the European blight likely made its way from South America to the United States and then to Europe via potato shipments and the seed trade, they reported Dec. 28 in the journal PLOS ONE. [27 Devastating Infectious Diseases]

Beyond killing hundreds of thousands of people, Ireland's Great Famine of 1846 to 1851 triggered an exodus of emigrants from the island to North America. The potato blight that caused all of this death and destruction had actually been detected on U.S. shores in 1843, two years before it showed up in Europe, wrote study leader Jean Ristaino, a plant pathologist at NC State. (Ireland was particularly hard-hit by the widespread blight because the potato was a staple in that country and because of pre-existing poverty exacerbated by British policy, scientists noted.)

The origin of the blight had been a source of scientific and historical debate, however. Some studies suggested that the strain of the blight-causing pathogen, Phytophthora infestans, arose in Mexico. Others pointed to the Andes. Ristaino and her colleagues cast a wider net than any previous research, sequencing genomes from both modern P. infestans samples and historical samples from Mexico, Central America, South America, Europe and the United States. The U.S. samples spanned the time period between 1855 and 1958 and included the oldest known sample of the pathogen still in existence today from North America. Likewise, the European samples dated from between 1846 and 1970 and included the oldest surviving European sample. The oldest samples from South America dated to 1913, and the oldest from Central America were from 1941. The oldest Mexican samples were from 1948.

The researchers sequenced portions of the nuclear genomes and one segment of the mitochondrial genome — the separate genetic sequence that resides in the cell's mitochondria, a structure that converts energy into a useable form. The researchers also sequenced 12 microsatellites, or simple sequence repeat (SSR) segments, of DNA. These repeating chunks of DNA have a high mutation rate, which allows researchers to detect mutations and changes over time.

The researchers found that both New World and Old World blight outbreaks were caused by pathogens with an SSR lineage that they dubbed FAM-1. (Previous research by another group had suggested the culprit was a different genetic variant called HERB-1, but that variant was not exclusive to the P. infestans pathogen, Ristaino wrote.)

After analyzing the patterns of mutations in these samples, the researchers used computer models to determine the probability of scenarios that could have led to those patterns. They determined that the most likely scenario was that the pathogen strain originated from a South American ancestor and then split into U.S. and Mexican strains.

The FAM-1 variant hung around long after it caused Ireland's famine. The same sequence was found in samples in the United States 100 years after 1843, when it first showed up around ports in New York City and Philadelphia, the researchers reported. It was also present in samples from 1913 in Colombia and in samples from 1942 in Costa Rica.

"FAM-1 was widespread and dominant in the United States in the mid-to-late 19th century and the early 20th century," Ristaino said in a statement. It was later displaced by a genetic strain of the pathogen called US-1, she said, which in turn has been replaced by a strain of Mexican origin that is still active.