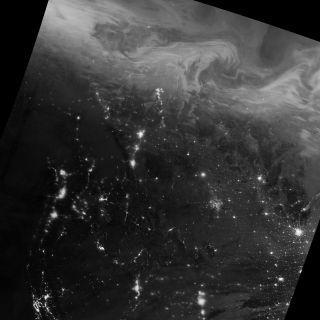 The northern lights — the swirling, cloud-like features in this image — stretched across northern Canada during the nighttime hours of Dec. 22, 2016.
(Image: © Jesse Allen / NASA Earth Observatory)

The northern lights put on a festive show over northern Canada just before Christmas, and a NASA satellite captured a stunning infrared image of the spectacular display.

The night after the winter solstice, NASA/NOAA's Suomi NPP spacecraft recorded the northern lights, or aurora borealis, across British Columbia, Alberta, Saskatchewan, Manitoba, Nunavut, and Northwest Territories in Canada on the night of Dec. 22. From 512 miles (824 kilometers) above the Earth, the satellite's Visible Infrared Imaging Radiometer Suite captured the northern lights display, which appeared as glowing swirls of clouds over northern Canada, NASA's Earth Observatory said in a statement.

The northern lights occur when particles from the sun known as the solar wind interact with Earth's magnetic field, according to NASA scientists. Because the particles are charged, they can cause electrical current changes in the field that then send energetic particles into the upper atmosphere's gases. When the particles hit the gases, they charge them, and when the gases release this gained energy, the aurora glows are triggered.

As the gases give up the energy, they release photons (light particles) of specific wavelengths, creating different colors. For example, researchers have found that oxygen atoms emit green and sometimes red light, while nitrogen is more orange or red. [Aurora Photos: See Breathtaking Views of the Northern Lights]

While such solar wind events can happen anytime, the solar storms that create the most magnificent displays of the northern lights occur roughly every 11 years, according to NASA researchers. The last cycle peak occurred in 2013, though NASA researchers reported that solar maximum was the weakest observed in a century.