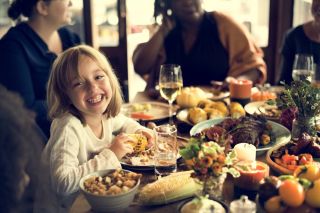 Smiles around the table this Thanksgiving really are possible.
(Image: © Rawpixel.com / Shutterstock.com)

So, it's Thanksgiving, and you're back at home, passing the mashed potatoes to your Aunt Jenny, whom you haven't seen in person in nearly a year. But you are friends with her on Facebook, so you know quite a lot about her thoughts on the election. Like ... every thought. Way too many thoughts.

How do you reconcile the smiling woman across the table with the conservative warrior or liberal firebrand you've been seeing on social media? Is Aunt Jenny's frothing Facebook persona her real self, or just a piece of her personality? And how do you talk to her if her views happen to fundamentally clash with yours?

The problem of political reconciliation around the Thanksgiving table is not a new one, but a particularly contentious and personal election, plus the ubiquity of social media, have made family harmony increasingly fraught.

"I think people may have caused some damage in relationships just because of the way that they interacted on social media," said Jaclyn Cravens, a marriage and family therapist and assistant professor at Texas Tech University. "Now, the holidays are coming up, and we may potentially have to sit down face-to-face with these individuals. We don't have the option of unblocking, unfollowing, defriending." [The 6 Strangest Presidential Elections in US History]

Online versus in person

For more than a decade, psychologists have been documenting a phenomenon called the online disinhibition effect. As described in a 2004 paper, people "loosen up" online; they're less restrained and more willing to express themselves openly. Sometimes, this is beneficial: People can show great kindness and generosity or open up about emotions and experiences that they otherwise might have kept hidden. That's benign disinhibition. Other times, online disinhibition is terrible: People threaten each other, throw out insults and hurl abuse. That's toxic disinhibition.

Disinhibition isn't the only way offline and online discussions can differ. A 2012 paper in the journal New Media & Society — one of the few studies to directly compare internet and real-world discussions of political issues — found that online participants of political dialogues were more likely to be male, younger and employed full time than those who attended public forums on politics in person. They were also less knowledgeable, less trusting, less tolerant and less interested in politics overall. Online discussion also appeared less likely to build consensus: Whereas 53 percent of offline-discussion participants said their last meeting ended in a decision to take an action, only 17 percent of online-only participants said the same.

Of course, that study compared online discussions to formal political meetings, not around-the-table chats between citizens. In this regard, research shows that your Facebook feed is probably more likely to be flooded with political debate than your real-world conversations. In a 2012 study, researchers analyzed the 2008 election and found that people talked about politics pretty frequently: At least in the run-up to a national election, it was the most-discussed topic among family members and the second-most-discussed topic among nonfamily members. Nevertheless, the researchers found that people assiduously avoid political disagreements: Only 29 percent of pairs of people who disagreed with one another said they talk about politics frequently, compared with 71 percent of people who agreed with one another.

Surviving in a social media world

OK, so you know you and Aunt Jenny will never see eye to eye on politics; that's why you've always spent your Thanksgiving dinners talking about football and your cousins' latest straight-A report cards. But thanks to the online disinhibition effect, you've been exposed to her beliefs — and she's probably been reading about your opinions, too. Maybe you've even gotten into online arguments.

"I think, a lot of times, people are shocked," Cravens told Live Science. "Like, 'Oh, I did not realize the extent of this belief or the extent of intolerance."

The first thing to tackle, Cravens said, is how people use social media. It's an oversimplification to say that someone's social media postings reveal their true selves, she said. [7 Weird But Nonpolitical Things to Talk About This Thanksgiving]

"We know, with internet communication, that there is this disinhibition side of being able to freely post anything and everything that comes to mind without as much awareness of repercussions of what we share," Cravens said. "I think we do a better job of managing some of those when we're having face-to-face interactions with someone else because we instantaneously see someone's reaction and can tell immediately if we've hurt someone's feelings."

In that sense, face-to-face discussions around the Thanksgiving table have the potential to bridge divides.

"Online or offline, there are just some universals," Cravens said. "Are we attempting to be empathetic with people that have different opinions than we do? Are we really trying to understand why we have those beliefs, or are we stuck with an assumption that fits our views, about why they voted a specific way?"

Going into a discussion to change someone's mind or to prove one's own righteousness is likely to end badly, Cravens said, but initiating a conversation to engage and understand can be more productive. [How to Argue Politics Without Losing Friends]

To engage or not to engage?

People in families of mixed political views need to think carefully about their goals before the holiday season starts, said Josh Klapow, a psychologist at the University of Alabama, Birmingham. Holidays are a minefield already, Klapow said: You put a bunch of people, who may see each other rarely, in a house for days at a time, force them to spend all their time together and often ply them with alcohol. Family dynamics and old resentments tend to rear their ugly heads when debates start, he said.

"That is not a good setting for conflict resolution," Klapow told Live Science.

Thus, even if you want to speak with a family member about his or her political posts, Thanksgiving may not be the time to do it, Klapow said. That doesn't mean you have to let go of everything for the sake of family unity, he said, but you may want to think about what duking it out in that environment is likely to accomplish, especially if the offending relatives are ones you see only a few days each year.

If disagreement and rancor are likely, Klapow said, families may even want to set explicit ground rules before the holiday starts, going as far as banning political talk altogether. If politics aren't off the table, focus on protecting yourself, Klapow suggested.

Clear verbal boundaries — "I'm not talking about this anymore" — and leaving the room to take a walk are time-tested strategies of the holiday season, Klapow said.

There are times when you can do everything right, exhibiting empathy and tolerance and setting firm boundaries, and some family member or another is going to fixate on ignoring those boundaries and trying to escalate, Cravens said. In those situations, it may be time to rethink the closeness of that relationship.

"There is a certain extent," she said, "where it's helpful to step back and examine the value of that relationship and the impact it's having on your life."