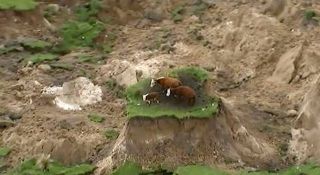 Cows in New Zealand have been left stranded on "quake islands" after a powerful earthquake struck the country Monday (Nov. 14), shaking and breaking up the land.

The powerful, 7.8-magnitude earthquake triggered landslides, tsunami waves and hundreds of aftershock quakes, according to the U.S. Geological Survey (USGS). The region of Canterbury, which is home to the areas hardest hit by the quake, has declared a local state of emergency, reported CNN. Thousands of people are stranded after the quake triggered landslides and a large river dammed up, cutting off the region. [Image Gallery: This Millenium's Destructive Earthquakes]

But residents aren't the only ones stranded.

The earthquake also affected New Zealand's livestock population, including three cows that an Associated Press helicopter spotted, stranded on a small grass outcrop after the earthquake. Their predicament went viral after the AP video showed the cows huddled on the small quake island.

A Kaikoura farmer told Newshub that he rescued his now-famous cows with a pick and shovel. The two beef cows and calf were part of a larger group of 14 cows rescued from the property, which the farmer said was relatively flat before the earthquake.

"We dug a track with a number of people. The soil was quite soft because it had all been tipped over and bumbled around," the farmer told Newshub of creating a flat path for the cows to move from the quake island. "They desperately needed water. Cows don't like living without water, so that was the first requirement. And I think one or two had lost calves in the earthquake, so they were a bit distressed."

Still, there is "no way of knowing" how many livestock animals were affected after Monday's earthquake, Leigh Catley, general communications manager at Federated Farmers of New Zealand, a national organization of farmers, told New Zealand news website Stuff.

"We're not even sure how many farms we're dealing with yet," Catley said. "There are some very, very big properties in that region, so we're probably talking about a reasonable number of stock."

Despite public concern for the livestock, with people even taking to social media to demand the animals be saved, local police told the media that the well-being of people is the top priority as officials continue to deal with the aftermath of the strong earthquake.

"The priority of the police is to make sure all human lives are safe, and we still need to account for all of them yet," local police told The Sydney Morning Herald. "In the meantime, it's all hands on deck, and if farmers and emergency services together can get to these cows, they will certainly make an effort to rescue them."