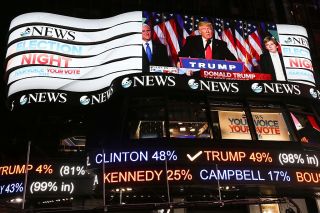 The core theme of Donald Trump's campaign – that the establishment was broken – drove waves of his supporters to the polls.

Surprisingly, this theme didn't make it into his victory speech. Nor did any reference to the seismic shift in American politics that took place, save for brief mentions that the night was "historic."

Trump took the stage at 2:50 a.m., spoke for approximately ten minutes, and finished the speech by mingling with supporters as The Rolling Stones's "You Can't Always Get What You Want" blared in the background.

This time, at least, Trump got what he wanted, and did so in authoritative fashion. But the most notable thing about president-elect Trump's victory speech was how different it was from the speeches he delivered on the campaign trail. In an effort to unify an intensely divided country, Trump discovered the rhetorical power of "we."

The speech was short, and it had all the elements of a standard victory speech. Trump thanked Secretary Clinton for her service and a hard fought campaign. He addressed Clinton voters and promised to be their president too. He laid out a set of uncontroversial goals like growing the economy and cooperating with other nations, and finally he thanked his supporters.

The speech was also uncharacteristically disciplined. It lacked the usual Trump digressions and strange syntax of his stump speeches. There was no talk of ISIS, or the need to build a wall to keep out immigrants. There were no negative assessments of American national security, the bankruptcy of the political establishment, or poor trade and security deals. There wasn't even a mention of his campaign slogan "Make America Great Again."

Instead, Trump sought common ground, saying he wanted to "bind the wounds of division" sowed on the campaign trail.

In this speech, Donald Trump discovered the rhetorical power of "we." On the campaign trail, Trump had become infamous for declaring himself as the solution to America's ills, most notably declaring that "I alone can fix it" when accepting the GOP nomination. President-elect Trump's victory speech, on the other hand, contained 30 uses of the word "we." At almost every turn, Trump opted for "we" over his usual "I" as the agent of action.

Trump employed "we" as the leading element in a rhetorical device called anaphora, where the repetition of a word helps to knit together a series of sentences. It is a technique made famous by Martin Luther King's "I have a dream" speech, and one that features prominently in other great American speeches like President Roosevelt's Pearl Harbor address.

Take this snippet of his speech. Trump used "we will" as a theme to tie together a number of hopeful goals:

This repeated use of "we will" accomplishes two important goals. First, it's a departure from Trump's usual tone, moving from the self-focused "I" of the campaign trail to the broader idea of "we" the nation.

Second, the it changes the tone of the speech from candidate Trump's negative claims of an America under threat towards a tone that is aspirational, even hopeful. It focuses on the work that is to be done, and the benefits of working together, as opposed to more divisive claims that blame Trump's opponents for America's failures.

Trump's campaign was divisive, and often vitriolic. Candidate Trump was often uncomfortably xenophobic, derogatory towards women, and spoke in racially charged overtones. But his victory speech at least signals that – at least for tonight – President-elect Trump will make overtures towards cooperation, towards translating the energy behind his movement into a shared and more collective vision for America. Whether this new tone will persist into the opening days of his presidency remains to be seen.

You can't, after all, always get what you want. But for the sake of a divided nation, we can at least hope that we will get what America needs.