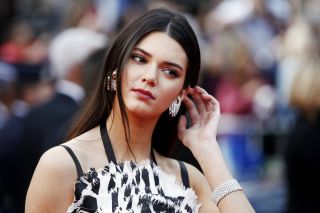 Kendall Jenner at the Cannes Film Festival in France in May, 2014.
(Image: © Andrea Raffin/Shutterstock.com)

Model and reality-TV star Kendall Jenner recently revealed that she's afraid to go to sleep because of a condition called sleep paralysis.

"I wake up in the middle of the night, and I can't move," Jenner said on the Nov. 6 episode of "Keeping Up with the Kardashians" on E!. "I looked it up online, and it's a weird thing called sleep paralysis," she said.

The experience is "terrifying," Jenner told her mother, Kris Jenner, on the show ."It's so scary when it happens — you literally feel like you're never going to get out of it," she said. [The Demon on Your Chest and Other Terrifying Tales of Sleep Paralysis]

Normally, dreams take place when a person is in REM sleep. While a person is dreaming, the brain paralyzes the muscles of the body so that a person cannot act out the dreams physically.

However, during sleep paralysis, these two things occur while a person is conscious, Brian Sharpless, an associate professor of clinical psychology at Argosy University in Washington, D.C., told Live Science in an interview in October.

This means that the dreams are technically hallucinations, and they're just as vivid as anything you'd see when you're awake, said Sharpless, who is also the author of "Sleep Paralysis: Historical, Psychological and Medical Perspectives" (Oxford University Press, 2015).

Episodes of sleep paralysis are usually brief, lasting just a few seconds or minutes, according to the Mayo Clinic.

Sleep paralysis is common in people with narcolepsy, the Mayo Clinic says. But people who do not have narcolepsy also may experience the phenomenon, especially in young adulthood, according to the Mayo Clinic.

About 8 percent of Americans have experienced at least one episode of sleep paralysis, a 2011 study from Pennsylvania State University found. People with conditions such as anxiety or depression may be more likely to experience sleep paralysis, according to the study.

Doctors do not have a specific treatment for sleep paralysis, Dr. Shelby Harris, director of behavioral sleep medicine at the Sleep-Wake Disorders Center at the Montefiore Health System in New York City, told Live Science in 2015.

If a person experiences episodes of sleep paralysis only infrequently, then improving his or her "sleep hygiene" may help, Harris said. Good "sleep hygiene" includes getting enough sleep on a regular basis; avoiding alcohol, nicotine, drugs and caffeine before bedtime; and keeping electronics out of the bedroom, she said.

However, people who have more frequent episodes of sleep paralysis may have an underlying medical condition that a sleep specialist could diagnose, Harris said.

During an episode of sleep paralysis, all a person can do is stay calm and realize that it will pass soon, Harris said. She noted, however, that "this really only works if you've had an episode or two before, and know what to expect. These attacks can be quite scary to experience, especially if you've never had one before."