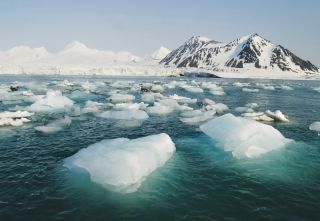 A mysterious "pinging" noise is emanating from the seafloor in one of Canada's northernmost territories, and officials have yet to identify the source.

The sound has been heard in recent months in the Fury and Hecla Strait, a channel of water in the Nunavut region of Canada. The Canadian Department of National Defence was informed of the strange noises and investigated the ping's origin, to no avail, reported the CBC.

According to internal correspondence obtained by the CBC, the department did not immediately rule out submarines, but did not consider the vessels a likely cause of the sounds, either. [What's That Noise? 11 Strange and Mysterious Sounds on Earth & Beyond]

A military patrol aircraft was sent to investigate the area on Tuesday (Nov. 1), reported The Guardian. In a statement to the British newspaper, department spokeswoman Ashley Lemire said various multisensor searches in the area, including a 1.5-hour acoustic search, failed to detect any anomalies.

"The crew did not detect any surface or subsurface contacts," Lemire told The Guardian. "At this time the Department of National Defence does not intend to do any further investigations."

Hunters in the remote Arctic hamlet claimed the "pinging" sound is driving wildlife away, and the CBC reported that the Nunavut legislature discussed the mysterious sea noise last month.

"That passage is a migratory route for bowhead whales, and also bearded seals and ringed seals. There would be so many in that particular area," Qulaut said, recalling his own days of hunting there. "This summer, there were none."

Locals have different theories for the pinging, the CBC reported, but no source has been confirmed. One theory blamed a mining company that has operated nearby, but the company said it doesn't have equipment in the water. Some locals also suggested Greenpeace could be behind the sound, scaring wildlife away from the hunting ground. However, a spokesperson for the environmental organization denied these allegations.

This isn't the first mysterious noise that the Canadian government has been called in to investigate. For years, a low rumbling known as the "Windsor Hum" has plagued residents of Windsor, Ontario. As of yet, research into that noise has failed to establish its origin.