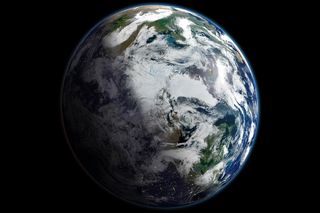 A new view of the Arctic was composited by NASA from images captured during more than a dozen satellite orbits.
(Image: © NASA Earth Observatory)

Satellite photos of Earth against the dark backdrop of space inspired the nickname "the blue marble," referring to the expanses of ocean that cover 71 percent of the planet's surface. But a new satellite view shows Earth's icier side.

In an image shared online today (Oct. 28) by NASA's Earth Observatory, the Arctic is front and center, showcasing the region of the planet covered by varying amounts of ice year-round. NASA scientists created the image to commemorate the first meeting of an international consortium of scientists planning global partnerships for Arctic research. The meeting was held in Washington, D.C., on Sept. 28. [Images of Melt: Earth's Vanishing Ice]

The spectacular view was composited from images collected by the Suomi NPP satellite, using its Visible Infrared Imaging Radiometer Suite, over the course of 14 trips around Earth on Sept. 2, 2012.

Shades of ocean blue, as well as green and brown hues indicating landmasses, are visible through swirling, white cloud cover. Alongside them, the Arctic region stands in stark contrast, its sheets of ice radiating outward.

The amount of sea ice in the Arctic fluctuates seasonally, and it can vary widely from year to year. But recent reports show a gradual and consistent trend of sea-ice loss over time that is progressing faster than scientists expected. This view was captured two weeks before the lowest-ever minimum cover of Arctic sea ice was observed, on Sept. 16, 2012, when it extended a mere 1.32 million square miles (3.4 million square km).

More recently, in March 2016, Arctic sea ice was at a record low, NASA scientists reported, calling this depleted state "the new normal." Sea-ice melting has been greatly accelerated in our warming world; the first half of 2016 was the hottest year since record keeping began in 1880.

And sea ice no longer recovers as it once did, meaning that its decline will only continue, scientists say. That makes it even more critical for scientists around the world to pool data and resources to understand how these rapid changes will affect the Arctic environment, and the impact it will have on Earth's oceans and global climate systems.