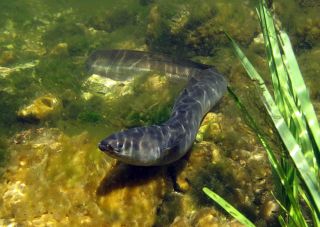 European eels migrate thousands of miles from European freshwaters to the Sargasso Sea, developing along the way from larvae to adults.
(Image: © Anders Asp)

To survive an arduous swim thousands of miles long without eating anything on the way, European eels apparently lose a significant amount of bone in a way that keeps them alive and moving, a new study finds.

This finding could yield insights that will help scientists prevent or reverse human bone loss, the researchers said.

In order to spawn, European eels (Anguilla anguilla) undertake a 3,000-mile-long (5,000 kilometers) migration from European freshwaters across the Atlantic Ocean to the Sargasso Sea, located between the Azores Islands and the Caribbean Sea. During this trek, previous research found that they not only mature sexually, but also abstain entirely from eating. [Quest for Survival: 17 Amazing Animal Migrations]

During this energy-consuming, months-long journey, eels lose substantial amounts of bone, other research has found. "Their bones become significantly thinner — for instance, their skull loses more than 50 percent of bone volume, while the spine loses about 65 percent of bone volume," said study senior author Björn Busse, a biomedical scientist and biomedical engineer at University Medical Center Hamburg in Germany.

A great deal remains uncertain regarding the specific mechanisms that drive this bone loss in eels. A better understanding of how this bone thinning works could "provide new directions in understanding human bone-loss syndromes," Busse said.

To shed light on how the eel skeleton shrinks as it matures, the scientists analyzed the bones of 30 specimens at different stages of the eel life cycle. Since eel migration takes place in the deep sea, and satellite tags are too big for animals as small as these eels (adults typically reach lengths of about 2.3 feet, or 70 centimeters), the researchers had no way to collect bone samples from actual migrating eels. Instead, they examined eels that were artificially induced in a lab to mature through hormone injections.

The researchers found that the parts of the eel skeleton that contain bones cells called osteocytes, such as the skull bones, break down "to provide minerals and nutrients necessary during migration," Busse said. In contrast, eel bone that lacked bone cells — such as the mineralized sheath around its notochord, a flexible rod making up part of the eel backbone — was protected from breakdown "to maintain the stability of the spine, which is crucial for reaching the spawning areas."

"It is often said that humans are the only species that commonly undergoes bone loss — osteoporosis — during life," Busse said. However, that belief may be due to the fact that most of the lab animals that are used in bone research are short-lived mice and rats, he said.

"We show that European eels, which are very long-living animals, living up to 80 years, also feature bone loss as a part of their natural biology," Busse said. "Learning how bone is lost in different species can give us new insights for understanding peculiarities in human bone-loss conditions, and may stimulate research ideas for the prevention and treatment of osteoporosis in humans."

Busse noted that European eels are endangered. "Hence, understanding their biology has [the] potential to preserve this important fish type," he said.

The scientists detailed their findings online Oct. 19 in the journal Proceedings of the Royal Society B.