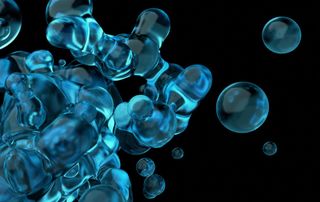 Hallucinations can range from simple geometric shapes, such as blobs, lines and hexagons, to seeing animals, people or insects.
(Image: © VAlex / Shutterstock.com)

How can we measure the mind? When you ask someone what they're thinking about, what they tell you is not necessarily the truth. This doesn't mean they're lying. It means many environmental, social and personal influences can change what someone tells us.

If I put on a white lab coat, suit or t-shirt and ask you a bunch of questions, what I wear will change what you say. This was demonstrated in the famous Milgrim experiments in the 1960s, which showed the power of perceived authority to control others' behaviours. People want to be liked, or give a certain impression. This is commonly referred to as impression management and is one of the hardest obstacles to overcome in scientific research.

Neuroscientists have made notable advances in measuring the anatomy of the brain and its regions at different scales. But they've made few big advances in measuring the mind, which is what people think, feel and experience. The mind is notoriously difficult to measure; but it needs to be done as it will aid development of new treatments for mental and neurological disorders.

Out-of-control mental imagery and hallucinations are good examples of mental health symptoms that are difficult to measure accurately in science and medicine. Our study published this week shows a new method to induce and measure visual hallucinations in anyone at any time.

These findings open the door to a new avenue of research. We can now study visual hallucinations in the lab using anyone as a subject.

Hallucinations are commonly associated with disorders such as schizophrenia and Parkinson's disease. But healthy people can also have visual hallucinations after taking drugs, being sleep deprived or suffering migraines, just to name a few conditions.

Generally, hallucinations are defined as an involuntary perception-like experience in the absence of an appropriate direct stimulus. To put it more simply, seeing or hearing something that isn't there. Hallucinations can range from simple geometric shapes, such as blobs, lines and hexagons, to seeing animals, people or insects.

These involuntary experiences are thought to come about when spontaneous changes in the brain temporarily hijack vision and attention, but the exact causes and underlying mechanisms aren't fully understood. The best way to understand these things, is to induce a hallucination and observe it in a laboratory.

We have known for more than 200 years that flickering light at particular frequencies can cause almost anyone to experience hallucinations. But the unpredictability, complexity and personal nature of these make them difficult to measure scientifically without having to rely on verbal descriptions. Their changing content, including colours and changing shapes, add to the difficulty.

The simple breakthrough in our research was to reduce hallucinations from flickering lights to a solitary dimension: grey blobs. To do this, rather than flashing random lights or a full computer or TV screen on and off, we flickered a doughnut ring shape instead.

To our surprise, when we did this, we no longer saw lots of different shapes and colours but just grey blobs. By reliably stabilising the hallucination in this way, we could start to objectively investigate its underlying mechanisms.

Our study's participant volunteers were university students with no history of migraines or psychiatric disorders. They watched the image of a plain white ring flicker on and off around ten times per second against a black background. All of them reported seeing pale grey blobs appear in the ring and rotate around it, first in one direction and then the other.

To measure the hallucinations, we placed a second ring marked with permanent perceptual grey blobs (not hallucinated) inside the white ring and then flickered this ring again. This allowed people to simultaneously look at hallucinated and perceptual blobs and make a simple comparison.

We showed a range of blobs of different perceptual strengths. The participants then stated whether the hallucinated blobs were lighter or darker than the real blobs. Their answers helped us calculate the equivalent point in strength or contrast between perception and hallucinations.

What else we did

We used behavioural science techniques to demonstrate that the hallucinations were arising inside the visual cortex. We did this by showing volunteers two flickering rings – one for each eye, displayed out of synchrony. So when one ring was presented, the other was removed, so they alternated between the two eyes.

This combination of the signals from the two eyes really only happens in the visual cortex, not in the eye, or other early processing areas of the brain that receive visual input before it gets to the cortex.

Further reading: Some people can't see, but still think they can: here's how the brain controls our vision.

Currently, we are testing this new method for inducing and measuring hallucinations in people with neurological disorders to reveal more about how clinical hallucinations are experienced and processed in the brain.

If we can discover the underlying mechanisms of visual hallucinations, this will give us targets to focus treatments on. We hope this new technique will open the doors to new avenues of research, not only shedding light on the foundations of human consciousness, but also helping to develop innovative new treatments for those suffering from hallucinations.