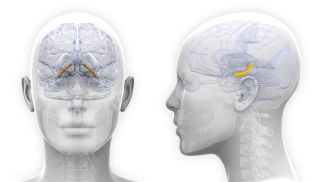 In women, the structures of the hippocampus (yellow) — the area of the brain that's central to memories, mood and emotions — can vary in sync with estrogen levels as they go through their menstrual cycle.
(Image: © Shutterstock)

Women's brains may change slightly every month, in sync with their menstrual cycles, a new study of one woman's brain finds.

Women experience monthly hormone fluctuations that influence the switching that takes place between their infertile and fertile days, and in a small study of just one woman, whose brain was scanned every few days over the course of two menstrual cycles, the researchers found that these estrogen-level changes also affect the hippocampus — the area of the brain that is central to memories, mood and emotions.

The researchers looked at 30 women, and measured the levels of estrogen in their blood. The women also underwent MRI scans of their brain, which the researchers used to measure the volume of the different regions of each woman's brain.

It's unclear how these monthly changes in the hippocampus's volume might affect women's everyday lives, but the researchers suspect that these brain changes affect women's behavior, said Claudia Barth, the lead author of the study and a Ph.D. student at the Max Planck Institute for Human Cognitive and Brain Sciences in Germany. [10 Things Every Man Should Know About a Woman's Brain]

"In mice, it has already been proven that it is not just this brain structure but also different behaviors which underlie a type of monthly cycle," Barth said in a statement.

Further studies should look at whether the same is true in women, the researchers said. The researchers said that their next step will be to test a larger group of participants, and to scrutinize the effects of the hippocampus's growth on behavior.

"If it appears, for instance, that women in certain phases of their cycle are particularly receptive" to making changes in their behavior, then this could be a good time for a woman to undergo therapy, Barth said.

The overall goal of this research is to investigate the relationship between the observed brain changes and a condition called premenstrual dysphoric disorder (PMDD), the researchers said. PMDD affects 1 in 12 women in the days leading up to the woman's period, and includes symptoms such as severe mood swings and anxiety.

"To get a better understanding of this disorder, we first have to find out which monthly rhythm the brain of a healthy woman follows," co-author Julia Sacher, a research leader at the Max Planck Institute. "Only then can we reveal the differences in persons affected by PMDD."

Editor's note: This story was corrected on Oct. 14. The study included 30 scans of the brain of one woman (not scans from 30 women as the story originally stated).