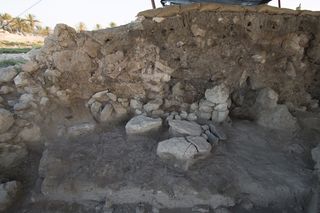 An excavated area at Tel Megiddo from 2014 shows a stone-paved floor that has fire-blackened sediment. The wall consists of collapsed red and yellowish mud bricks.
(Image: © Ruth Shahack-Gross)

About 3,000 years ago, a fire destroyed the Near East city of Tel Megiddo, leaving ash and burned mud-brick buildings in its wake. And according to a new study, the blaze may have leveled the entire city in a mere 2 to 3 hours.

That's right — Tel Megiddo, located in present-day northern Israel, could have burned in about the time it takes the watch a long movie, for instance, "The Hobbit: An Unexpected Journey."

The findings, based on scientists' own experiments with homemade mud bricks, not only help archaeologists understand the destruction of this ancient city in the Near East, but also serve as a window into how fires affected other settlements, researchers said. [8 Grisly Archaeological Discoveries]

"Mud bricks are important to study, because they account for as much as 90 percent of standing architecture in many ancient settlements," said Robert Homsher, a postdoctoral research fellow at the W.F. Albright Institute of Archaeological Research in Jerusalem, who was not involved with the research.

For their study, the researchers made their own mud bricks, a process that was like "playing with mud," study researcher Ruth Shahack-Gross, an associate professor of geoarchaeology at the University of Haifa in Israel, told Live Science.

Shahack-Gross, worked with postdoctoral fellow Mathilde Forget, while both were employed at the Weizmann Institute of Science in Israel. To make the bricks, the researchers took soil, removed large stones from the soil, and mixed it with straw, also called chaff, and water. Then, they poured the mixture into brick molds and dried the bricks in an oven. This "ancient" method is still used today, especially in rural areas in the Near East, as "it's a very cost-effective method of construction because you use the soil around you," Shahack-Gross said.

Rather than set the bricks on fire, the researchers put them in a hot oven and measured how long it took the bricks' cores to reach 1,112 degrees Fahrenheit (600 degrees Celsius), a temperature reached by the ancient burned bricks at Tel Megiddo, according to previous analyses, Shahack-Gross said. In addition, the researchers tested bricks that had different sizes and shapes, as well as different amounts of chaff.

As expected, larger bricks took longer to heat up than smaller bricks, but the amount of chaff didn't significantly affect the time needed to heat the brick, the researchers found. Moreover, items within the dwellings — such as wood-support beams, furniture, matting, stored food and oil, and bedding — could have fueled the fire, helping it spread, she said.

The study provides, "for the first time, a quantitative tool by which archaeologists [can] estimate the duration of destructive conflagration events" within ancient cities, the researchers wrote in the October issue of the journal Antiquity.

Other researchers suggested follow-up studies to account for other factors involved in a burn. For instance, Homsher said a future experiment could look at whether old bricks with holes from decayed chaff would burn more slowly than newly made bricks.

In addition, temperature alone may not give an accurate burn time, said Karl Harrison, a lecturer of forensic archaeology at Cranfield University in England, who was not involved with the study. [Photos of First Fire-Scarred Petrified Wood]

"Fires need to be understood as complex events of dynamic energy release," Harrison told Live Science in an email. "Concentrating on temperature alone, while it can be an important indicator, will tend to give a simple picture of a fire that is erroneous without putting [it] into a wider context."

For instance, during a real fire, the bricks may be heated only from one side, rather than from all sides as they were in the oven, Harrison said.

"By heating a brick all the way around and measuring how long it takes to reach 600 degrees [Celsius] you'll find a minimum (the authors say 2 to 3 hours), but that time will have little if any bearing on a real time of burning in an urban fire," he noted.

Shahack-Gross acknowledged that the study is one of many that may help researchers understand how long it took for fires to burn ancient cities.

"Clearly, there are many limitations," she said. "We are totally aware of the fact that the experiment, [which was done] in controlled conditions in the lab, does not mimic what happened in the past."