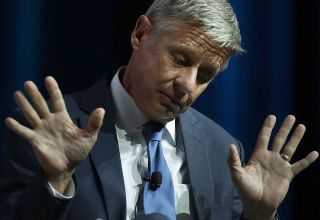 In an interview with MSNBC's Chris Matthews, Libertarian presidential candidate Gary Johnson couldn't come up with a single name when posed the question, "Who's your favorite foreign leader?"

In a callback to an earlier televised appearance in which Johnson struggled with recall, the candidate himself admitted he was having an "Aleppo moment" and a "brain freeze," citing the "former president of Mexico," but unable to name him. With an assist from a member of the audience, Johnson did eventually come up with former Mexican president Vicente Fox.

We've all had memory lapses during inopportune moments, but what causes them?

Memory can often let us down during stressful or anxiety-inducing events, and it gets worse with age, according to a 2014 study published in the Journal of Neuroscience.

Spikes in levels of cortisol, the naturally occurring hormone that surges when we are stressed, can lead to memory problems as we get older, found a team of University of Iowa researchers. Although cortisol is important to survival, long-term stress negatively impacts the prefrontal cortex, a part of the brain linked to short-term memory.

When an individual endures repeated, high levels of stress for a long period of time, elevated levels of cortisol can lead lead to a shrinkage and eventual loss of synapses, connections in the brain that allow us to process, store and recall information, what researchers describe as a "weathering of the brain."

Even over a shorter time period, stress can impair our ability to learn as well as recall memories, found a 2008 study by researchers from the University of California - Irvine. A shorter time frame doesn't just mean months or weeks, but even a few hours of stress can inhibit brain-cell communication. Instead of cortisol, the researchers in this study identified corticotropin releasing hormones (CRH), activated during periods of acute stress, as the culprit.

RELATED: The Election Is Stressing People Out

CRH limit the way in which synapses collect and store memories in the hippocampus, a region of the brain that is the center learning and memory. For this earlier study, the researchers observed that the release of cortisol led to the disintegration of dendritic spines, tiny protrustions on neurons that receive synaptic input.

Another possible culprit for an occasionally faulty memory is sleep deprivation. Political candidates are notoriously busy, and often struggle to get enough sleep as a result. Sleep deprivation harms memory, and research published as recently as last month backs that up.

According to a study in mice published in the journal eLife, just five hours of sleep deprivation is enough to lead to a loss in connectivity of neurons in the brain. The researchers observed that losing sleep reduced the length and density of dendrites in the hippocampus. A three-hour catch up nap, however, was enough to reverse the damage.