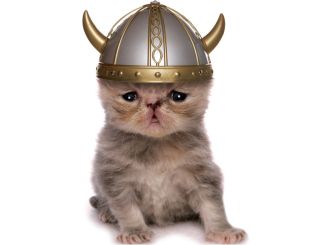 The early origins of domesticated cats are shrouded in mystery, but a new genetic analysis suggests that felines traveled the world with farmers and Vikings.

The News section of Nature reports that the broadest genetic analysis to date of ancient cats reveals two waves of cat expansion. In the first wave, cats spread from the Middle East into the eastern Mediterranean, alongside human farmers. The second wave of expansion started in Egypt — where cats had religious significance and were often mummified — and spread by sea to Eurasia and Africa.

These discoveries come courtesy a study of the mitochondrial DNA of 209 ancient cats whose remains were preserved at archaeological sites. Mitochondrial DNA is passed down through the maternal line and is separate from the nuclear DNA that comes from both parents. The research was presented at the 7th International Symposium on Biomolecular Archaeology, which took place between Sept. 14 and Sept. 16 at the Oxford University Museum of Natural History. [See Images of the Ancient Egyptian Cats]

A lack of funding has caused research on cat domestication to lag behind research on dog domestication, study researcher Eva-Maria Geigl, an evolutionary geneticist at the Institut Jacques Monod in France, told Nature. Archaeological evidence suggests that cats and humans started to interact around the dawn of agriculture. In 2004, researchers reported in the journal Science that they'd discovered a human and a cat buried together on the island of Cyprus. The burial dated back 9,500 years. Prior to that discovery, researchers had thought that cats had been domesticated in Egypt about 4,000 years ago — though the discovery of two cats and four kittens in an animal burial ground in the Upper Egypt city of Hierakonpolis in 2014 suggests the existence of some sort of cat husbandry in Egypt 2,000 years before that.

Villagers in China may have domesticated cats about 5,300 years ago, researchers reported in 2013 in the journal Proceedings of the National Academy of Sciences. Based on a few bones, the scientists found that the cats ate a diet that was heavy in millet — or, more likely, that they ate a diet heavy in rodents that ate a lot of millet. This dietary information meshes with the theory that cats were drawn to early agricultural settlements by a plethora of prey. Humans would have encouraged the feline infiltration because cats got rid of rodent pests.

According to Nature, the new research finds that the second wave of cat population expansion took place thousands of years after the first, from the fourth century B.C. to the fourth century A.D. Mitochondrial DNA from Egyptian cats was found as far away as northern Germany at a Viking site dating to between A.D. 700 and A.D. 1000, Geigl told Nature. These seafaring sorts probably kept cats on their ships to discourage mice and rats, she said.

Geigl hopes to sequence the nuclear DNA of ancient cats as well, but she and her team found one additional bit of feline trivia from the mitochondrial DNA efforts: The mutation responsible for the patchy coats of tabby cats didn't occur until Medieval times.