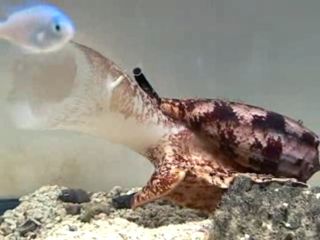 Venom that snails use to paralyze their prey before gobbling them up could inspire a new drug for diabetes.

The venom that sea-dwelling cone snails squirt is an ultrafast-acting version of the hormone insulin, the molecular key that helps cells take in sugar from the blood and use it as fuel. And now, researchers have discovered that the chemical hack that makes cone snail venom so fast acting, could also be used to make human insulin act faster, which could lead to better blood sugar control for people with diabetes.

"The venom insulin has to work quickly, so we could use those same principles to make a human insulin therapeutic, to use the same tricks that the snail uses to attack fish," said study co-author Mike Lawrence, a structural biologist at the Walter and Eliza Hall Institute of Medical Research in Victoria, Australia. [See Video of a Venomous Cone Snail Eating a Fish]

Cone snails are a large family of predatory mollusks that lurk in seas around the world. The slimy fish hunters use a hypodermic-needle-like tooth to squirt a deadly venom into the water. Some cone snail species, such as Conus geographus and Conus tulipa, release a venom that paralyzes their prey. And then the snail will devour those fish whole, using its elastic, tube-sock-shaped mouth.

But how exactly do the snails immobilize fish while slowly gobbling them up? In a 2015 study in the journal Proceedings of the National Academy of Sciences, scientists reported that they discovered one secret behind this fast-acting paralyzing venom: It contains a unique form of insulin. The molecule enters the fish's bloodstream through the gills and then causes a rapid, dangerous drop in blood sugar known as hypoglycemic shock. The mollusks' venom-insulin is more similar to fish insulin than to the version of the hormone the animals use to regulate their blood sugar, according to that study.

The stunning speed at which a cone snail's venom stuns its prey intrigued Lawrence and colleagues. Many of the nearly 422 million people worldwide with diabetes take insulin because their body cannot either make or use enough of the hormone to regulate blood sugar, according to the World Health Organization. But most of the insulin drugs that are available act very slowly.

One problem is that the insulin that people with diabetes use does not directly enter the bloodstream. Rather, a needle is used to inject the drug into the skin, and the drug must then diffuse through fat and connective tissue before entering the blood. People typically need to take insulin about 15 to 20 minutes before eating, and a mismatch between when the insulin starts working and when the body needs it can cause organ-damaging high blood sugar or dangerously low blood sugar, according to the American Diabetes Association.

Lawrence and his colleagues wondered whether the secret behind a cone snail's weaponized insulin could be harnessed for people with diabetes.

They analyzed the chemical structure to see why it so quickly entered a fish's bloodstream. They found that the molecule — which is the smallest form of insulin that is known in nature — was unique in its molecular structure.

For instance, human insulin is made up of two parts that are connected by a molecular hinge. Past work has shown that without the hinge, insulin doesn't work in the human body. That same hinge makes the molecule bulky, however, causing it to diffuse slowly through tissue, Lawrence said.

But cone snails have discovered a unique insulin hack: Instead of this large hinge, their insulin has just a single amino acid.

"That single change substitutes for the entire hinge. That's the trick that the snail has got," Lawrence told Live Science.

This makes the insulin molecule tiny and also much quicker to act, the researchers reported Monday (Sept. 12) in the journal Nature Structural & Molecular Biology.

In lab experiments, the team found that the insulin from the Conus successfully bound to human insulin receptors.

The new findings suggest a molecular strategy for designing faster-acting human insulin: The hinge in human insulin could be snipped out and replaced with the amino acid that cone snails use in their insulin.

Of course, the research is still early and there is no guarantee that the modified insulin would be safe for humans: After all, cone snails don't care if the insulin they use has side effects — the whole point of the drug is to kill its victims, Lawrence said.