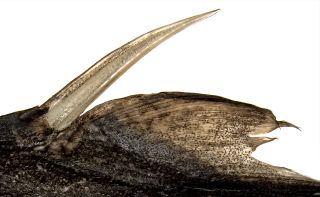 This photo is a close up of the dorsal-fin spine of a lanternshark.
(Image: © W. Leo Smith and Jennifer H. Stern)

More than 2,000 species of fish are venomous, and a new analysis of these animals shows that the most common way they deliver their venom is through spines on their backs.

The research, which analyzed the evolution of venom and its delivery mechanisms among freshwater and saltwater fish, also found that venom glands arose 18 separate times among fish. (In contrast, snake venom arose just once during snake evolution, in an animal that was an ancestor to all of today's snakes. Since then, snake venom has changed over time in different snake lineages.)

This means that more research on the relatively vast array of fish venoms may one day help scientists figure out how to use fish venom in treatments for certain medical conditions, the researchers said.

"For the first time ever, we looked at the evolution of venom across all fishes," lead author William Leo Smith, assistant curator at the University of Kansas Biodiversity Institute, said in a statement.

Fish venom is known to cause "incredible pain and swelling" in humans, but it may also break down tissue, prevent blood from clotting, cause blood cells to burst, and affect blood pressure and neurons, he said. [Photos: The Freakiest-Looking Fish]

In the study, the researchers looked at medical reports of people who had been exposed to the venom of certain fish species. The researchers then assembled and examined the family trees of these fish species, based on specimens from natural history museums, and looked at how their abilities to inject venom might have evolved over time.

The scientists found that venom and its delivery mechanisms evolved four times among cartilaginous fishes (those, such as sharks and rays, whose skeletons are made of cartilage rather than bone). It also arose once in eels, once in catfishes and 12 times in spiny-rayed fishes, a group of fish with sharp and rigid fin spines, the researchers found.

When the researchers looked at groups of venomous fish among freshwater and marine fishes, they found that most venomous freshwater fishes are species of catfishes. In contrast, among the fish that live in marine environments, the ability to inject venom is widespread among many different fish groups.

One interesting fact about fish venom is that it is not nearly as harmful to humans as snake venom can be, Smith told Live Science. "People don't die from fish venom," he said.

But the qualities of fish venom, such as its capacity to prevent the clotting of blood or affect blood pressure, could one day be utilized in medications, he said.

The new study was published July 3 in the journal Integrative and Comparative Biology.