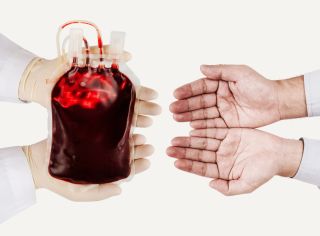 An 83-year-old man kept the symptoms of a genetic disease at bay — without even knowing he had it —  thanks to his years of donating blood, according to a recent report of his case.

The disease, called hereditary haemochromatosis, causes the body to absorb too much iron from food, said Dr. Kohtaro Ooka, an internal medicine resident at Yale School of Medicine and the lead author of the case report.

Too much iron in the body, also called iron overload, can have wide-ranging effects, Ooka told Live Science. [Here's a Giant List of the Strangest Medical Cases We've Covered]

The liver, where iron is stored, is particularly vulnerable to the effects of excess iron, Ooka said. A buildup of iron in the liver can lead to damage and scarring, he said. When the organ is severely scarred, it's called cirrhosis. Too much iron can also lead to joint pain and problems with the pancreas, including diabetes, Ooka said.

But the man, who didn't find out he had the condition until he was 83, had none of these symptoms, Ooka added.

Men with hereditary haemochromatosis generally start to show symptoms in their 40s or 50s, said Dr. Tamar Taddei, an associate professor of digestive diseases at Yale and the senior author of the report, which was published in August in the journal BMJ Case Reports. The symptoms take a long time to show up because it takes many years for the level of iron in the body to rise to the point that it causes these symptoms, she said.

To treat the disease, doctors need to remove iron from the body. To do so, they draw blood, which is filled with iron, said Taddei, who is also a physician at the VA Connecticut Health System. In this case, it appears the man's decades of giving blood acted as a form of protection from the symptoms of the disease, Taddei said.

Hereditary haemochromatosis is one of the few diseases that doctors still treat with bloodletting, which people used for centuries to treat many maladies, Taddei told Live Science. [10 'Barbaric' Medical Treatments That Are Still Used Today]

Taddei added that women with hereditary haemochromatosis tend to develop symptoms much later than men do, normally in their 60s. Women are less likely to accumulate excess iron in their bodies, because of menstruation, which causes them to lose blood each month, she said.

But getting too much iron is rarely an issue for most people, she added. Normally, the amount of iron that's absorbed from food is highly regulated by the body, Taddei said. The body usually does not absorb more than 2 milligrams of the mineral a day, and anything extra is excreted from the body, she said.

The doctors discovered that the man had the condition when he came to doctors because of "vague abdominal pain," according to the report.

Liver cancer is common in people who have hereditary haemochromatosis, but only if they also have cirrhosis, Taddei said. The type of cancer that the man had is "almost unheard of" in a person without cirrhosis, she added.

The man told the doctors that starting in his 20s he donated blood regularly, and continued doing so for more than 20 years, according to the report.