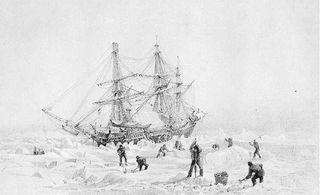 More than 170 years ago, British explorer Capt. Sir John Franklin and crew embarked on a journey to navigate the fabled Northwest Passage, but the expedition never made it back. Now, the second ship of that doomed voyage may have been found in the appropriately named Terror Bay, The Guardian reports.

Cued by Inuit word of mouth, archaeologists with the Arctic Research Foundation on Sept. 3 found what they think is the HMS Terror. The ship sits in about 80 feet (24 meters) of water and is nearly intact, according to The Guardian.

"This vessel looks like it was buttoned down tight for winter and it sank," Arctic Research Foundation spokesperson Adrian Schimnowski told The Guardian. "Everything was shut. Even the windows are still intact. If you could lift this boat out of the water and pump the water out, it would probably float." [In Photos: Arctic Shipwreck Solves 170-Year-Old Mystery]

Franklin launched the expedition to the Arctic in 1845, commanding two ships, the HMS Erebus and the HMS Terror. He and his men were attempting to navigate the Northwest Passage, the sea route that connects the Atlantic and Pacific oceans through the Arctic Ocean and was long-sought as a trade route by several explorers. In September 1846, during the attempt, the two ships became stuck in ice. A note found on King William Island in 1859 revealed that the ships were deserted in April 1848 and that Franklin himself had died on June 11, 1847. Eight other officers and 15 men had also died at the time of that writing — April 25, 1848 — meaning that 106 men were left to face their fate. None would ever be heard from again.

Since 2008, a Parks Canada-led mission has been searching for the Franklin ships. In 2014, researchers discovered the wreck of the HMS Erebus in Victoria Strait. Divers discovered artifacts aboard the ship, including a bronze bell, a 680-lb. (310 kilograms) cannon, patent-medicine bottles and uniform buttons. [Photos: The HMS Erebus' Bronze Bell]

A remotely operated vehicle entered the possible HMS Terror wreck on Sept. 11 and spotted plates and a can on the shelf of a food pantry, as well as wine bottles and a desk with open drawers. The wreck was found 60 miles (96 kilometers) south of where archaeologists had expected to find it. They were tipped off by an Inuit crewmember, Sammy Kogvik, 49, of Gjoa Haven, who had seen a hunk of wood in sea ice while on a fishing trip years before. Kogvik took pictures of the wood but lost his phone later that day, he told The Guardian.

He didn't tell anyone the story until joining the crew of the research vessel Martin Bergmann, which was searching for the wreck. Because of his tip, the vessel detoured to head toward the spot where the Terror was resting.

The next step, according to Parks Canada spokesperson Meaghan Bradley, is to confirm the wreck as the HMS Terror.

"The discovery of HMS Terror would be important for Inuit communities and Canada, reflecting the ongoing and valuable role of Inuit knowledge in the search and making a significant contribution to completing the Franklin story," Bradley wrote in a statement sent to Live Science.

Canadian government officials likewise heralded the discovery and the tip from the Intuit community that led to it.

"The multiyear contribution from Parks Canada and its partners in the Arctic has led to the discovery of two of the most famous and mysterious ships in Canada's history," Catherine McKenna, Canada's minister of the environment and climate change, said in a statement. "HMS Erebus was found through a unique combination of Inuit tradition knowledge and cutting-edge science, and Inuit knowledge was again central to this amazing discovery. This latest discovery will offer another unique and incredible opportunity for archaeological exploration and the sharing [of] Inuit history and culture with the world."