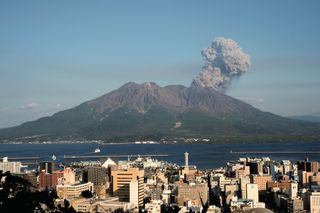 Sakurajima is one of the most active volcanoes in Japan, with eruptions occurring daily. New research suggests the volcano is due for a major eruption in the next 25 years.
(Image: © Sakurajima Volcano Research Centre)

A Japanese volcano that last erupted in 1914 could be set to blow in the next few decades, new research suggests.

The pool of liquid magma swelling beneath Sakurajima volcano is growing every year — a sign of a growing threat.

"This big reservoir is growing, and it's growing at quite a fast rate," said study co-author James Hickey, a geophysical volcanologist at the University of Exeter's Camborne School of Mines in England.

At the current rate, Sakurajima could erupt catastrophically in about 25 years, according to the study.

Sakurajima volcano, located on the southwestern edge of Japan's Kyushu island, last erupted in 1914, killing 58 people and causing a massive flood in the nearby seaside city of Kagoshima. Sakurajima is fed by a pool of magma lying beneath the subterranean Aira caldera, and the filling of this magma reservoir causes the volcano to have minor eruptions roughly every day.

In the 1950s, scientists tried to quantify the risk of future eruptions at Sakurajima by using a simple model, assuming the Earth's surface above the volcano was flat and that the pool of magma was spherical. The model had a big advantage: "You can basically solve it with pen and paper," Hickey told Live Science.

However, over the years, scientists realized that this ultrasimplified model did not match volcanic activity at Sakurajima.

To better forecast eruptions at Sakurajima, Hickey and his colleagues developed a much more complicated computer model — one that incorporated the unique topography of the area surrounding the volcano. That model also took into account that the Earth's crust is made up of different layers, with different properties. Then, the team incorporated data from seismometers and highly precise GPS devices placed in and around the volcano. Those sensors revealed tiny changes in the Earth that were clues to the activity of the magma pool deep below.

The researchers discovered that the reservoir of magma beneath the caldera was growing at a significant rate. From this model, they forecast that it would take 130 years from the past major eruption for the next one to occur — meaning the region is due for a major explosion around 2044.

The new model was better at capturing past behavior at the volcano, the researchers reported today (Sept. 13) in the journal Scientific Reports. It also found that the pool of magma beneath the caldera looks more squashed and oblong than spherical, Hickey said.

Volcanologists don't have a crystal ball, however, and the current forecast could be slightly off because they assume a constant growth rate for the magma pool. But if the daily eruptions were to increase to two or three times per day — releasing small amounts of that magma — that could offset the growth of the magma pool, which could delay a deadly eruption for a long time, Hickey said.

And even with highly accurate models, volcanoes sometimes surprise experts. For instance, in 2014, Mount Ontake volcano in Japan erupted without warning, killing about 57 people.

However, leaders in the region are already prepared for an eruption in the near term: The Kagoshima City Office prepared a new evacuation plan after an eruption scare in August 2015 prompted an evacuation crisis, study co-author Haruhisa Nakamichi, associate professor at the Disaster Prevention Research Institute, Kyoto University, said in a statement.