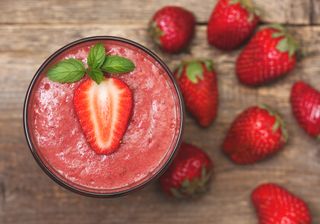 Nearly 90 people in seven states have become sick in an outbreak of hepatitis A linked to frozen strawberries imported from Egypt, according to the Centers for Disease Control and Prevention. But how does the hepatitis A virus get into strawberries?

Berries of all types are actually a common conduit for viruses, said Benjamin Chapman, a food-safety specialist and an associate professor at North Carolina State University. Over the past decade, there have been several virus outbreaks linked to imported berries, he said.

One of the reasons for this is that berries are very delicate, and so unlike other, hardier fruits and vegetables, berries need to be harvested by hand, Chapman told Live Science. [Top 7 Germs in Food that Make You Sick]

Tomatoes, for example, are machine-harvested, so no hands touch them, he said. But berries are too fragile for machines, so each berry is handpicked, he said.

Because hepatitis A is spread through the "fecal-to-oral route," if workers picking berries were infected with hepatitis A and had not properly washed their hands, they could transfer the virus from their hands to the berry, Chapman said. In parts of the world where hepatitis A is more common, this is definitely a risk, he added.

It's more likely, however, that the water used to irrigate the strawberries was the source of the virus in this outbreak, Chapman said. And, yes, because of that fecal-to-oral route, that means sewage-contaminated water.

Berries are often watered shortly before they're harvested so that farmers can increase the weight of the fruits, Chapman said. This can be done either through drip irrigation, where the water is applied at the base of plants and goes directly to the roots, or through overhead irrigation, where the water is sprayed on the plants from above, he said.

In overhead irrigation, that water ends up directly touching the berries. If the water is contaminated with hepatitis A, the virus can land right on the fruit, Chapman said.

And once a berry is contaminated, it's unlikely that the virus will be washed off, Chapman said. Because berries are more delicate than other fruits, they're not washed as often, he said. They might be lightly sprayed or misted before being frozen, but that probably won't remove a virus, he said. And berries have a lot of nooks and crannies on their surfaces, where viruses can hide, he added.

The next step, freezing the berries, only further preserves the virus, Chapman said. And because frozen berries are sold as "ready to eat," people are unlikely to heat them before eating, he said. This is especially likely if the berries are being used to make a smoothie, as occurred in the current outbreak, he added.

Chapman said that he actually microwaves all of his berries before eating them or refreezing them, though he added that his method of heating them to above 200 degrees Fahrenheit (93 degrees C) might be overkill.

Still, there's not enough data to suggest that just rinsing the berries would sufficiently remove a virus, he said.