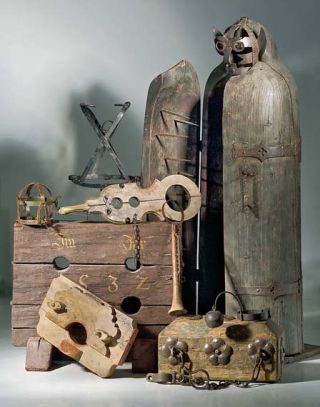 Iron maidens are one of the most notorious torture devices out there. But are they real?

The answer is no — and yes. The widespread medieval use of iron maidens is an 18th-century myth, bolstered by perceptions of the Middle Ages as an uncivilized era. But the idea of iron-maiden-like devices has been around for thousands of years, even if evidence for their actual use is shaky.

The iron maiden has been described as a human-sized box festooned with interior spikes. The hapless torture victim would be forced inside and the door would shut, driving the spikes into the body. The spikes were supposedly short and positioned so that the victim wouldn't die quickly, but would bleed out over time. Creepy, right? [Medieval Torture's 10 Biggest Myths]

And basically fictional. The first historical reference to the iron maiden came long after the Middle Ages, in the late 1700s. German philosopher Johann Philipp Siebenkees wrote about the alleged execution of a coin-forger in 1515 by an iron maiden in the city of Nuremberg. Around that time, iron maidens started popping up in museums around Europe and the United States. These included the Iron Maiden of Nuremberg, probably the most famous, which was built in the early 1800s and destroyed in an Allied bombing in 1944.

Siebenkees wasn't the first to dream up a terrible box full of nails as a torture device, though. "The City of God," a Latin book of Christian philosophy written in the fifth century A.D., tells a tale of torture of the Roman general Marcus Atilius Regulus, who was locked in a nail-studded box. Marcus didn't die of being impaled, though; he was forced to stay awake lest the nails pierce his skin, and eventually died of sleep deprivation.

Greek historian Polybius, who lived around 100 B.C., spread a related story. Polybius claimed that the Spartan tyrant Nabis constructed a mechanical likeness of his wife Apega. When a citizen refused to pay his taxes, Nabis would have the faux wife wheeled out.

"When the man offered her his hand, he made the woman rise from her chair and taking her in his arms drew her gradually to his bosom," Polybius wrote. "Both her arms and hands as well as her breasts were covered with iron nails … so that when Nabis rested his hands on her back and then by means of certain springs drew his victim towards her … he made the man thus embraced say anything and everything. Indeed by this means he killed a considerable number of those who denied him money."

It's difficult to tell if any of this is true — ancient historians have a way of exaggerating —but the idea of iron-maiden-like devices clearly did not originate with the Middle Ages. The period has been rather unfairly associated with other elaborate torture devices, too, said Peter Konieczny, the editor of the magazine Medieval Warfare, who recently wrote about the myths of medieval torture at medievalists.net. The Pear of Anguish, a sort of speculum supposedly inserted into orifices and painfully winched open? No record of use in the Middle Ages. It might have been a sock-stretcher. How about the rack? There are some records of use during the Middle Ages, but the device (which supposedly would rip its victims joints apart) was conceived of in the days of Alexander the Great.

Torture did happen in the Middle Ages, Konieczny told Live Science. It was sometimes used to extract confessions of guilt before an execution, on the justification that confessing sin before death would save the person's soul from an eternity in Hell.

"There was an idea in the Middle Ages that you were really honest when you were under a lot of punishment, under a lot of strain," Konieczny said. "That the truth comes out when it starts to hurt."

But torture wasn't usually all that elaborate.

"The more common torture was to just kind of bind people up with rope," Konieczny said.

But myths about over-engineered pain and punishment still resonate. In 2013, for example, local journalism site Patch reported that a history of torture exhibit at the San Diego Museum of Man had sent attendance at the museum up 60 percent over the previous year, helping pull the institution out of a financial hole.

Most of the myths about medieval torture arose in the 1700s and 1800s, when people were motivated to see the people of the past as more brutal than those of the modern-day, Konieczny said. "You get that idea that people were much more savage in the Middle Ages, because they want to see themselves as less savage," he said. "It's so much easier to pick on people who have been dead for 500 years."

Exaggeration tends to build on itself over time, Konieczny said, leading to 18th-century myths that persist as fact today. These myths aren't restricted to torture; a May 2016 article in the Public Medievalist argues that the flail, the stereotypical ball-and-chain weapon, wasn't really a staple of the medieval battlefield at all. Many museum examples are from later eras, and the only evidence of the flail in manuscripts comes from illustrations of fantastical battles; they don't show up, for example, in armory catalogues from the era.

A similar sort of exaggeration has occurred over the Siege of Baghdad in 1258, Konieczny said. By the time of the U.S. invasion of Iraq in 2003, it was common to hear that millions had died when the Mongols took the city. Contemporary sources, however, refer to tens of thousands dead, not millions.

"Then, about 20 years later, you get this letter where one Mongol leader is writing, boasting how he captured Baghdad and killed 200,000 people," Konieczny said. Fifty years later, histories start talking about 800,000 deaths, and then, over the next couple centuries, the numbers rise to a million or more.

Speaking of Iraq, that country provides a sad footnote to the iron maiden myth. In 2003, Time Magazine reported the discovery of a real iron maiden at the Iraqi National Olympic committee compound in Baghdad. Saddam Hussein's son, Uday Hussein, was once the head of the committee and the country's soccer federation, and athletes reported that he would humiliate, beat and torture underperformers. Time reported that the iron maiden in Baghdad was "worn from use," and an AP video shows the device, but it's unclear whether there are any eyewitness accounts of the iron maiden being used.