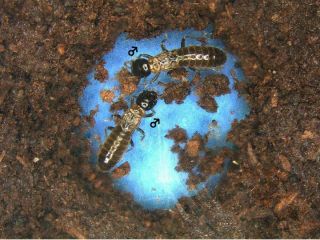 When male termites are single, and no female mates can be found, the guys tend to form homosexual couples in order to survive, a new study finds.

These homosexual pairings may give male Japanese termites an evolutionary edge, according to new research. Scientists found that when female mates are lacking, male termites will pair up and nest together. These same-sex pairs will even take over a heterosexual couple's nest, killing the resident male so that one can member of the male-male pair can mate with the female, the researchers said.

Scientists previously thought homosexual pairings for invertebrates like insects were the result of misrecognition of males as females. However, in the new study, researchers at Kyoto University in Japan found that the male termites in same-sex couplings did not act as if they had mistaken their partner as female. [Gay Animals: Alternate Lifestyles in the Wild]

"Japanese termites usually make nests in monogamous, heterosexual pairs," study lead scientist Nobuaki Mizumoto, an insect ecologist at Kyoto University, said in a statement. "In theory, misrecognizing a female for a male in a monogamous mating system should incur considerable costs for reproduction. There had to be some sort of benefit if this were a common behavior."

Male termites do not survive long on their own, but those who nested with another male survived much longer, according to the study. Male-male pairings were also beneficial when searching for female termites, Mizumoto said, a time when the risk of becoming prey is higher.

The researchers monitored the homosexual termites' behavior and saw the insects build nests together, just as heterosexual couples did. Once a heterosexual couple completed its nest and began digging tunnels surrounding it, a male-male pair would travel through the tunnel to invade, killing the male occupant of the nest. Genetic analysis of the subsequent offspring showed that one of the invading males was able to successfully mate with the female.

Though pairing with another male is not the best option, as only one of the termites can mate once a female is found, the researchers noted that the behavior does give single termites a better chance at survival.

"It's clear that male-male pairing is a strategy for survival," Mizumoto said.

The new study was published online Aug. 9 in the journal Animal Behaviour.