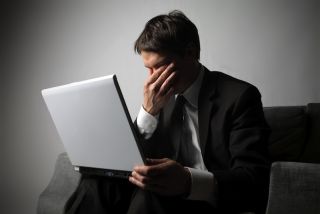 If your job causes stress and anxiety in your life, it may seem obvious that it may be bad for your health. But how does your history of job satisfaction affect your health years down the line?

A new study shows that people who had low levels of job satisfaction in their 20s and 30s may have an increased risk of mental health problems in their 40s.

"We found that there is a cumulative effect of job satisfaction on health that appears as early as your 40s," lead author Jonathan Dirlam, a doctoral student in sociology at The Ohio State University, said in a statement.

There was no difference, however, in mental health risk between those who grew more satisfied with their jobs over time and those who were consistently "very satisfied" with their jobs. [7 Ways to Reduce Job Stress]

"Those with the upward job trajectory were the same as those who were always high," Dirlam told Live Science. "It's kind of encouraging that if you work your way up, it can overcome any potentially negative health effects."

In the study, the researchers looked at data from about 6,500 people who participated in the National Longitudinal Survey of Youth 1979, a long-term study that has followed participants since 1979, when they were 14 to 22 years old. The new study included health information in the survey that was collected when participants were in their 40s.

The people in the study who started with high job satisfaction, but showed a downward trend in their satisfaction levels over time showed health measurements that were in the middle of the pack. But the fact that this group fared better than the group with always-low levels of job satisfaction shows that a person’s history of job stress, and not just their current stress levels, affects their mental health risk, the researchers said.

But if the finding holds true, and low job satisfaction does increase the risk of mental health problems, the general downward trend in job satisfaction that has been observed in the U.S. since the 1980s could have major effects on the health of people in this country, the researchers said.

The researchers presented the paper today (Aug. 22) at the annual meeting of the American Sociological Association in Seattle.

Editor’s note: This story was updated to include the information about the group that showed a downward trend in their satisfaction levels over time.