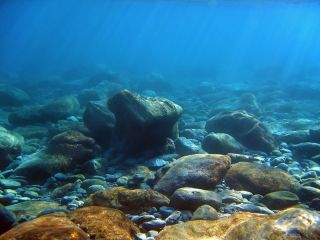 The Mediterranean Sea is home to what could be the world's oldest oceanic crust, an undisturbed section of Earth's outermost shell that scientists say is about 340 million years old.

Most oceanic crust is less than 200 million years old, because it is typically recycled back into the Earth's mantle at subduction zones (where two tectonic plates collide). But a new study shows that part of the eastern Mediterranean Sea may contain the oldest known oceanic crust.

Much of this region's tectonic characteristics are uncertain because of its thick sedimentary cover and lack of magnetic data. In the new study, researchers used magnetic sensing equipment to profile areasof the eastern Mediterranean. [Photo Timeline: How the Earth Formed]

"Changes in the magnetic field's orientation over time are recorded in the ocean floors, creating a unique bar code that provides a time stamp for crust formation," study author Roi Granot, a geologist at Ben-Gurion University of the Negev in Israel, said in a statement. "The results shed new light on the tectonic architecture and evolution of this region and have important implications on various geodynamic processes."

In an analysis of these "bar codes," Granot found that rocks in the so-called Herodotus Basin, located in the eastern Mediterranean,had magnetic stripes associated with oceanic crust formed at a mid-ocean ridge. The cooling of magma at a mid-ocean ridge magnetizes the minerals in newly forming rocks, which align with the direction of Earth's magnetic field, according to the study.Granot said the ancient crust in this part of the eastern Mediterranean could be remnants of one of Earth's early oceans, Tethys, which existed long before the Atlantic and Indian oceans. If that idea is correct, these findings show that the ancient Tethys Ocean formed much earlier than scientists previously thought.

"With the new geophysical data, we could make a big step forward in our geological understanding of the area," Granot said.

The new study was published online Aug. 15 in the journal Nature Geoscience.