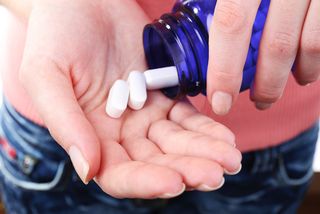 For older women with certain health conditions, taking calcium supplements may be linked with an increased risk of dementia, according to a new study.

In the study, the researchers looked at the medical history of 700 women between ages 70 and 92 who did not have dementia at the start of the study. The researchers asked the women if they were regularly taking calcium supplements and tested their memory and thinking skills. The scientists also scanned the brains of 447 of the participants.

The researchers found that 54 women had had a stroke before the study started, and 98 women were taking calcium supplements at the start of the study.

Among the women who had their brains scanned at the start of the study, 71 percent had lesions on their brains’ white matter, which is a marker for cerebrovascular disease — a group of disorders that affect blood flow in the brain. Such lesions are common in older adults, with one review study estimating that anywhere from 50 percent to 98 percent of elderly adults may have them.

The researchers then followed all the women for five years, and found that 59 women developed dementia, and 54 women had strokes during this time period, according to the findings, published today (Aug. 17) in the journal Neurology.

Dr. Marc Gordon, chief of neurology at Zucker Hillside Hospital in Glen Oaks, New York, who was not involved in the study, also said that it is too early to determine whether calcium supplements might directly cause dementia in some women. The numbers of women who were taking supplements in the study were small, he said.

Future studies with more participants should be conducted, he said. "All of that said, I think it raises a concern that there is certainly a rationale for thinking that calcium supplements could have an adverse effect on outcomes, particularly in women with cerebrovascular disease," he said.

"People have a tendency to assume that dietary supplements are automatically innocuous, [but] high levels of supplementation as opposed to just dietary intake [of calcium] could conceivably have some deleterious effects," he said.