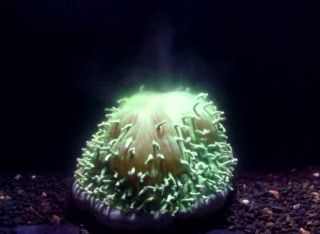 A blob of a coral has been caught violently pulsating, with tentacles wriggling every which way, as it ejects its algal residents in a time-lapse video of the phenomenon called bleaching.

The video revealed for the first time how the mushroom coral Heliofungia actiniformis, which is a single polyp, physically reacts to heat stress. The results gave scientists more information about how corals will respond to warming seas that are associated with climate change, the researchers said.

"Mass coral bleaching events are a concern for scientists globally with recent events on the Great Barrier Reef highlighting the threat of elevated water temperatures to the heath of reef ecosystems," Luke Nothdurft, of Queensland University of Technology (QUT) in Brisbane, Australia, said in a statement. [Video: Watch the Blob-Like Coral Pulsating to Evict Its Algal Residents]

Like other corals, H. actiniformis provides a cozy home for colorful algae called zooxanthellae. In return for the aquatic abode, the zooxanthellae — in this case a species of Symbiodinium — photosynthesize and provide the coral polyp with food. But when the going gets tough, such as warming waters, the coral can no longer afford to host the tiny tenants. The process of ditching the algae is called bleaching because the coral loses its colorful veil.

Though scientists knew coral bleaching occurred, they didn't know all the details of how the polyps evicted their residents.

To find out, Nothdurft and study lead author Brett Lewis, also of QUT, kept H. actiniformis in aquariums; over a period of 12 hours, the scientists increased the temperature of the aquarium water from 26 degrees Celsius to 32 degrees Celsius (79 to 90 degrees Fahrenheit). The temperature was kept at the highest level for up to eight days, according to a paper on the study published online Aug. 5 in the journal Coral Reefs.

Within hours of the temperature rising, the mushroom corals began to inflate their bodies and then "suddenly and violently contracting and ejecting Symbiodinium through their oral openings over the four- to eight-day duration of the experiments," Nothdurft said in the statement.

In the video, a green plume of the algal cells can be seen coming out of the coral's mouth. During the pulsing, the coral ballooned to 340 percent of its normal body size of about 3 inches (7 centimeters) high and about 6 inches (15 cm) across, as seen in images in the journal article, the researchers found.

"Seeing how pulsed inflation was critical to the bleaching process was amazing," Lewis told Live Science. "This type of pulsing is documented in other species of coral as a way to mitigate other stressors, but this was the first time observing its role in coral bleaching."

If the heat stress goes away, the algae may return to the coral, the researchers said. "If the Symbiodinium is removed from the host and does not recolonize quickly, the corals can die," Nothdurft said.