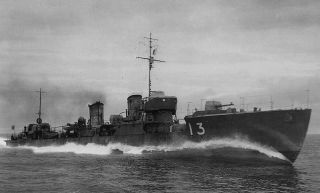 Take a dive to a sunken World War II-era warship today, as marine researchers gear up to visit the wreckage site using a robotic sub.

A remotely operated vehicle (ROV) will explore the wreckage of the Hayate, a destroyer in the Imperial Japanese Navy's fleet that was sunk by American forces in December 1941. The dive will be broadcast in high-definition video live online, beginning at 4:30 p.m. ET, and you can watch it unfold on Live Science.

The dive is part of an ongoing expedition aboard the research vessel Okeanos Explorer, a National Oceanic and Atmospheric Administration (NOAA) ship. Reserachers are currently exploring the largely uncharted deep-sea ecosystems and seafloor near the Wake Atoll Unit of the Pacific Remote Islands Marine National Monument (PRIMNM). [Shipwrecks Gallery: Secrets of the Deep]

A deepwater mapping system was used in April to map the waters near Wake Atoll, where the Hayate reportedly sank, in an attempt to locate wreckage. Several features were found at the site that will be investigated, according to NOAA.

The Hayate was the first Japanese warship lost during WWII, according to historians. One of nine "Kamikaze-class" destroyers, Hayate was sunk by American coast-defense guns during the Battle of Wake Island in December 1941. Only one member of the Hayate's crew was rescued following the battle.

Okeanos' current mission began on July 27 and will last through Aug. 19. The scientists aim to explore the areas in and around Wake Atoll, as part of NOAA's three-year campaign to collect information about the ocean's deep-water ecosystems.

"Increasing baseline knowledge of ocean habitats is critical to the conservation and preservation of these remarkable ecosystems," NOAA explained on the Okeanos' mission website. "Exploratory missions, such as those conducted via Okeanos Explorer, are necessary to expand our knowledge of the unknown and to provide baseline data for resource managers."

Much of the ocean remains unexplored, and the Wake Atoll area has had virtually no exploration beyond SCUBA-diving depths, according to NOAA. At-sea and shore-based science teams are working together on some of the area's first deepwater scientific observations.

Recent dives by the Okeanos Explorer have included exploration of an unnamed seamount, surveying of precious coral, and more.

Editor's note: An earlier version of this story stated the live stream was set to begin at 2:30 p.m. ET. The story has been updated to reflect the correct start time of 4:30 p.m. ET.