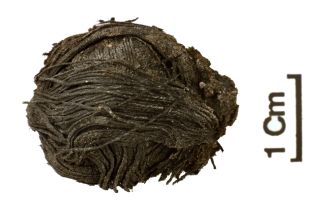 Thread from a Bronze Age village is one of many everyday objects that were abandoned when the village burned, archaeologists said.
(Image: © Cambridge Archaeological Unit)

An unusually delicate pair of artifacts recently emerged from a dig site in the United Kingdom: a tiny ball of thread and another length of thread wound around a bobbin. Both are estimated to be approximately 3,000 years old.

The fragile fiber objects appeared during the excavation of a Bronze Age village near what is now Petersborough, in eastern England. The location, known as Must Farm, is thought to have been abandoned suddenly after a fire decimated the settlement thousands of years ago. Many everyday objects were left behind, and are now being discovered and brought to light for the first time.

Archaeologists working on the project shared images of the thread ball and bobbin on the project's Facebook page. That generated a discussion thread (naturally) that drew dozens of questions and comments from curious readers, though in-depth analysis of the finds is yet to come. [Photos: Prehistoric Village Holds Bronze-Age Treasures]

The photo of the first fiber object, a miniscule thread ball that still appears to be neatly wound, was posted on July 21, and the archaeologists described its condition as "amazing." They explained that the thread was probably so well preserved because it was made of plant fiber, "likely flax or nettle," that carbonized in the fire and then became waterlogged — a process that helped protect it.

The greenish-brownish thread might have been a different color before it was burned, soaked and buried, but it's "very unlikely" that even the most careful cleaning and preparation would restore its original hue, the archaeologists said in a comment on Must Farm's Facebook page, as carbonization would have removed any trace of pigment.

Found close by the thread ball was a small bobbin with more thread wrapped around it, also in excellent condition, the archaeologists reported. "We did as much as possible to delicately remove sediment from the fibers before we lifted it," the archaeologists wrote on Facebook.

A great variety of well-preserved artifacts have been discovered at Must Farm during this excavation: woven textiles, pots, a bronze sickle, an ax head and glass jewelry. It is not known what caused the fire that destroyed the village, though archaeologists have suggested that it might have been deliberately set by hostile neighbors.

These balls of thread and the other everyday items found at Must Farm present a remarkable snapshot of life thousands of years ago, disrupted by a single catastrophic event. For this reason, the site has been compared to a more famous doomed city and archaeological site: Pompeii.

"The Must Farm settlement has one of the most complete Bronze Age assemblages ever discovered in Britain, and it is giving us an unprecedented insight into the lives of the people who lived there 3,000 years ago," the archaeologists explained on the Must Farm website.

Once excavation at the site is complete, the much longer process of preparing, preserving and describing their discoveries begins, and that can take years to complete, the scientists said on Facebook.