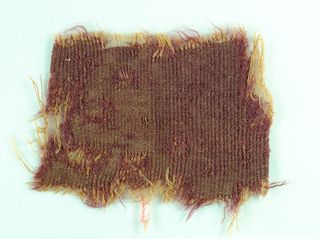 Three scraps of fabric found in Israeli caves had been dyed indigo, purple and crimson — the hues of the rich and regal during the Roman era — using sea snail ink some 2,000 years ago, a new analysis shows.

The textiles had been found in the Wadi Murabba'at caves, which are just south of Qumran, an ancient settlement near the caves where the Dead Sea Scrolls were uncovered. One of the fabrics revealed a blue color that may have been created by a a technique similar to that of tekhelet, a "Biblical blue" found in religious materials inlcuding in a tzitzit (a knotted tassel worn by observant Jews).

"The importance of this fabric is extremely significant as there are practically no parallels for it in the archaeological record," Israel Antiquities Authority officials say in a statement, referring to the blue color.

Jewish sources from the Roman era noted that the most prestigious dyes to make deep purples and reds were extracted from murex snails. According to the Israel Antiquities Authority, thousands of textile bits from the Roman period have been found in this desert region, but only two fabrics before actually bore traces of the richly colored snail dye, which makes the new discovery all the more remarkable. [The Holy Land: 7 Amazing Archaeological Finds]

"There were times when the masses were forbidden from dressing in purple clothing, which was reserved for only the emperor and his family," officials with the Israel Antiquities Authority (IAA) said in a statement. "These measures only served to increase the popularity of that color, the price of which soared and was equal to that of gold."

Na'ama Sukenik, a researcher with the IAA, turned up the three murex-dyed fabrics while conducting a chemical analysis of 180 textiles specimens from the Judean Desert caves for her doctoral dissertation at Bar Ilan University.

Using a technique known as high-performance liquid chromatography, Sukenik found that most of the fabrics were dyed with plant-based substances. But two double-dyed bits of tunics from the Murabba'at caves were colored "purple-bordeaux" with two of the most expensive materials in antiquity: dye from the Murex trunculus (also known as Hexaplex trunculus) and dye from the cochineal insect, Sukenik discovered, according to the IAA. A third piece of fabric was colored with murex dye and then exposed to sunlight or heated to achieve a shade of blue, the analysis showed.

Sukenik speculates that the fabrics may have belonged to Jews taking refuge during the Bar-Kokhba revolt, the last Jewish-Roman war, or members of a Roman unit that was stationed in the Murabba'at caves after the revolt.

Though it's rare to find fabrics dyed with murex secretions, the snails' shells are more likely to survive in the archaeological record. Excavators recently uncovered a cache of murex shells in an ancient mansion in Jerusalem, hinting that whoever lived there helped to supply the rich dye for ritual garments.