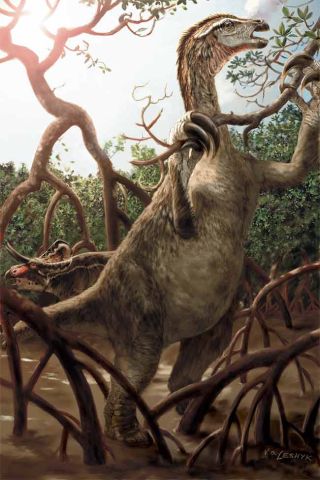 Nothronychus graffami shown foraging in a mangrove forest near the shoreline 93 million years ago. A bull Zuniceratops is passing in the background.
(Image: © © Victor Leshyk 2009.)

The most complete skeleton of a type of pot-bellied dinosaur, a therizinosaur, has been discovered in southern Utah.

Such remains shed light on the evolution of leafy and meaty diets back in paleo times, suggesting that iconic predators like Velociraptor may have evolved from less fearsome plant-eating ancestors.

The newly discovered dinosaur, dubbed Nothronychus graffami, lived some 93 million years ago. When alive, the animal would have stood at 13 feet (4 meters) and sported a beaked mouth and forelimbs tipped with 9 inch- (22 cm)-long sickle claws.

Its stumpy legs, large gut and other features suggest the lumbering giant scarfed down plants rather than chasing after meaty prey.

"It takes a lot of gut-time to digest plants," said lead researcher Lindsay Zanno of the Field Museum in Chicago. "Plant eaters have to develop long digestive tracts to get the energy they need to survive."

The dinosaur's physical features match up with other so-called therizinosaurs, a mysterious group of dinosaurs now thought to be a type of maniraptoran dinosaur, which share a common ancestor with birds (though the two groups split some 150 million years ago, during the Jurassic Period).

While most theropods, such as Tyrannosaurus rex and Velociraptor, were meat eaters, the therizinosaurs likely consumed plants.

To figure out how both carnivorous and herbivorous diets evolved in theropods, Zanno and her colleagues compared the anatomy of the newly discovered dinosaur with specimens from 75 other theropod species. In doing so, the team found that plant-eating therizinosaurs like N. graffami are the most ancient group of maniraptorans.

That meant plant-eating was around early in the evolution of maniraptorans.

Several maniraptoran lineages show adaptations for plant-eating, including the beaked ornithomimosaurs (ostrich-dinosaurs) and oviraptorosaurs (egg-thieves). So the team looked at herbivorous and carnivorous features in a sample of maniraptorans, finding the earliest species may already have been at least flirting with the idea of plant-eating.

"Before this we thought that plant-eating theropods like therizinosaurs were a rare occurrence," Zanno told LiveScience. "We knew they must have evolved from meat-eaters somewhere in their ancestry, but before our study it seemed like plant-eating was the exception not the norm for maniraptoran theropods."

Rather than a rarity, Zanno and her colleagues discovered that eating plants exclusively or in combination with meat can be traced back to the origins of the maniraptoran group as a whole.

The researchers speculate this ability to nab veggies may have allowed maniraptorans to move into new niches and diversify in ways they couldn't when only meat was on the menu.

"Something happened early in the evolution of maniraptorans that is tied to their incredible diversity," Zanno said. "The ability to feed on much more than just meat may have been one of several key innovations contributing to their ultimate success."

The discovery is reported online July 15 in the journal Proceedings of the Royal Society B: Biological Sciences.