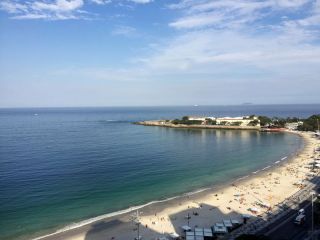 The coastal waters around Rio de Janeiro, where many Olympic water competitions will soon take place, are reportedly teeming with harmful viruses and bacteria. So what illnesses might people catch if they swallow some of the water?

If the water has been contaminated with raw sewage, as has been reported, then a number of common pathogens could be lurking there and make people ill, experts say.

"There are many types of microbes in raw sewage that have the potential to cause human disease," said Stephen Morse, a professor of epidemiology at Columbia University Mailman School of Public Health in New York City. [10 Ways the Beach Can Kill You]

A study of Rio's beaches commissioned by the Associated Press found much higher levels of viruses and markers for bacterial contamination in some cases than would be considered safe in the United States.

The biggest concern for athletes, as well as beachgoers in general, will be the potential for infection with viruses, said Dr. Alisa Muñiz Crim, a gastroenterologist at Nicklaus Children's Hospital in Miami. Although bacteria such as E. coli are found in sewage and can make people sick, bacteria tend to break down in salt water, so there's a lower risk of bacterial infections, Muñiz Crim said.

In contrast, "Viral organisms can persist in the salt water and the sand for days, weeks and months," Muñiz Crim told Live Science.

The following pathogens could be expected in water if it's fairly contaminated with sewage:

But it's not just ocean swimmers, sailors and rowers who are at risk of infection with these illnesses; people also could become infected if they consume drinking water that wasn't purified, Morse said. This could be expected in a large city like Rio, where there are great disparities in wealth, he said. "The number of people may exceed the infrastructure for things like sewage treatment and water treatment," Morse said.

In addition, some people who fall ill may not only experience an acute illness during the Olympics but also could be at risk of developing a long-term condition. It's been theorized that, in some cases, infections may disturb the natural communities of bacteria that live in the human gut — called the microbiome — and that this disturbance, in turn, could later trigger an autoimmune disease, such as inflammatory bowel disease, in people who are predisposed to the condition, Muñiz Crim said.

"There's a lot of suggestion that our microbiome in our intestinal tract controls potential risk" for the development of many diseases, Muñiz Crim said.

Still, the percentage of swimmers and athletes who will likely catch an infection is small — less than 10 percent, and probably closer to 2 to 5 percent, Muñiz Crim said. That's because many factors influence whether people get infected — from the amount of water they swallow, to the concentration of contaminants (which varies depending on the weather and the tide), to their own immune system, she said.

It's also important to note that these problems are not unique to Rio — about 30 percent of travelers to any developing country will contract a gastrointestinal illness, Morse said. Still, in Rio, "it may be a little easier to get [sick] from the water than in some other places," he said.

Although many bacterial infections can be prevented by taking antibiotics, there are fewer ways to prevent viral infections, Muñiz Crim noted. But there is a vaccine available for hepatitis A, which travelers to Brazil are advised to get.

At this point, people who plan to enter Rio's waters should do everything they can to make sure they receive the appropriate vaccines and follow the recommended safety guidelines for the Rio Olympics (from the Centers for Disease Control and Prevention or the World Health Organization), Muñiz Crim said.

"And just don't swallow the water," she said.