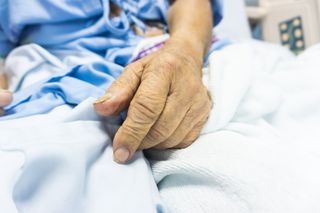 For patients facing serious illnesses, dying isn't necessarily the thing they dread the most — according to a new survey, a majority of patients consider bowel and urinary incontinence and having to rely on a breathing machine to be fates worse than death.

In the survey, researchers asked 180 patients with serious illnesses if they considered 10 different health states, ranging from being unable to get out of bed to being in a wheelchair, to be better or worse than dying. The results were published today (Aug. 1) in a research letter in the journal JAMA Internal Medicine.

Avoiding death is often the main goal for doctors and patients, the researchers, led by Dr. Emily Rubin, a fellow in pulmonary and critical-care medicine at the University of Pennsylvania, wrote in the letter. But "despite this general preference," studies have shown that a large minority, and in some cases a majority, of healthy patients consider states such as severe dementia to be "worse than death," the researchers wrote. [The 10 Deadliest Cancers and Why There's No Cure]

All of the patients in the survey were ages 60 older and had serious illnesses, including advanced forms of cancer and heart failure, according to the researchers.

They found that more than half of the patients considered bowel and bladder incontinence and relying on a breathing machine to live to be health states worse than death. In addition, more than half of the patients considered being unable to get out of bed, being confused all the time, having to rely on a feeding tube to live, and needing care all the time to be either worse than, or the same as, death.

And more than 50 percent of the patients considered living in a nursing home to be better than death, while the remaining patients thought it was the same or worse than death, the researchers found.

When patients in the hospital are facing serious illnesses, they are often at a high risk for ending up in many of the health states that the researchers included in the survey.

But many hospitals assume "implicitly or explicitly that death is an outcome to be avoided no matter what the alternatives are," the researchers wrote.

There are many reasons why patients in hospitals receive care to prolong life even when they are living in states that they have deemed to be the same or worse than death, according to the researchers. For example, patients may change their preferences as death nears, or they may believe that their health will be restored, the researchers wrote. In addition, doctors may not offer options that are consistent with what the patient wants, they added.

But patients may also underestimate their abilities to adapt to certain health states, the researchers wrote. It's possible that these "once-feared states" may become more tolerable once they have been experienced, they said.

The researchers noted that while there are some limitations to the study (for example, it was carried out in just one health-care system), the findings suggest that more research is needed to improve patient outcomes.