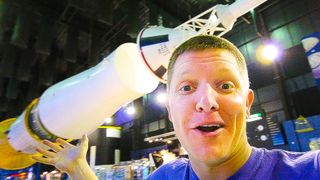 Destin Sandlin uses video demonstrations and explanations to get people as excited as he is about learning new things about the world — every day.
(Image: © Destin Sandlin / Smarter Every Day)

In this series of articles, some of YouTube's most popular science channels take a turn in the spotlight. Their creators employ a range of techniques and styles, weaving together graphics, footage, animation, sound design, and a general curiosity about the world around them, exploring and sharing the unexpected and fascinating details of their unique science stories.

YouTube's 'Smarter Every Day': Exploring the world with science

"How does this work?" is one question that curious people never stop asking, regardless of age or experience.

From a child building her first bridge out of blocks to a structural engineer puzzling out how to implode a pier, inquisitive minds seek to understand — and even improve — the world around them by breaking down everyday objects and processes into more manageable bits.

And on the YouTube channel "Smarter Every Day," host and creator Destin Sandlin makes videos that use science to explore what makes things operate the way they do, what holds them together, and what happens when they fall apart — or are blown up. [7 Crazy Things That Happen Only When It's Really Cold]

On camera, Sandlin's gleeful anticipation for learning something new is a hallmark of his demonstrations, whether he's investigating why cats always land on their feet, how to light a match inside a balloon or the challenge of eliminating "poop splash."

Sandlin is a full-time engineer ("I also test rockets … but that's a different story," reads his Tumblr), and he produced his first video — how to light a bonfire using rockets — purely to entertain and educate a group of his friends. But they received it so enthusiastically that he made more videos, eventually launching the channel "Smarter Every Day."

At first glance, it may seem like the topics of Sandlin's videos don't have much in common — he peers inside kangaroo pouches with the same zeal that he explores turning gravity into light.

And Sandlin doesn't shy away from putting himself on the line in the name of science education. In a recent video explaining why you really do need to don your own oxygen mask first when an airplane cabin depressurizes, Sandlin deliberately experiences the effects of hypoxia — oxygen deficiency — during a controlled experiment with astronaut Donald Pettit.

Ultimately, despite the wide range of science questions that the channel delves into, the single unifying thread is Sandlin's dedication to learn something new every day, and to inspire his viewers to do the same.

"I explore the world using science," Sandlin says on his website. "That's pretty much all there is to it."