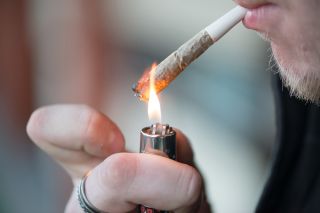 Exactly how much marijuana is in a typical joint may be less than previously thought, a new study finds.

Figuring out precisely how much marijuana is in a typical joint can help researchers answer important questions about drug use and trafficking, the researchers said. [11 Odd Facts About Marijuana]

"It turns out to be a critical number in estimating how much marijuana is being consumed [nationwide], how much [of the drug that] drug-trafficking organizations are putting on the market and how much states might expect in revenue post-legalization" study co-author Greg Ridgeway, an associate professor of criminology and statistics at the University of Pennsylvania, said in a statement.

The new findings are based on information from more than 10,000 marijuana purchases over 11 years. This information comes from a survey of people in the U.S. who were arrested and interviewed about their substance use and drug transactions. When interviewees mentioned that they bought a certain number of joints for a certain price, the researchers used this information to estimate the average grams of marijuana in each joint.

The researchers also used a mathematical model to take into account differences in drug prices in different areas, as well as price inflation over the years.

The new findings "can be incorporated into drug policy discussions to produce better understanding about illicit marijuana markets, the size of potential legalized marijuana markets, and health and behavior outcomes," the researchers said.

The study is published in the August issue of the journal Drug and Alcohol Dependence.