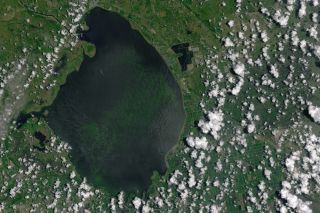 A toxic algal bloom that is covering a good chunk of Lake Okeechobee in Florida can be viewed from space.
(Image: © NASA Earth Observatory images by Joshua Stevens, using Landsat data from the U.S. Geological Survey. )

A huge bloom of toxic algae that took over Florida's largest freshwater lake has been captured in stunning images taken from space.

The NASA images show an expanse of blue-green algae that covered Lake Okeechobee in Florida this summer. The toxic bloom appeared in May and expanded to 33 square miles (85 square kilometers) in area, covering a good chunk of the 730-square-mile (1,913 square km) body of water — the second-largest lake entirely within the contiguous United States (second only to Lake Michigan).

The invasion by the single-celled organisms, also called cyanobacteria, was still present on July 2, 2016, when the images were captured by NASA's Operational Land Imager,  aboard the Landsat 8 satellite.

Algal blooms occur for a variety of reasons. Pollution, nitrogen-fertilizer-laden runoff from farms and even warm lake water can fuel the growth of these single-celled creatures. The cyanobacteria — often blue-green algae or other phytoplankton — use sunlight to make food and thrive when concentrations of nitrogen and phosphorous rise.

Algal overgrowth can choke off other life in lakes and rivers, and some algae also release toxins that can sicken people, causing liver failure in the most serious cases.

Lake Okeechobee is experiencing this persistent bloom in part because of the wet winter, which caused other lakes and rivers to swell, according to NASA's Earth Observatory. As a result, many water districts chose to drain their bodies of water earlier in the season, funneling the warm, nitrogen-rich water through the St. Erie Canal, which then emptied into Lake Okeechobee. The result was a tenacious toxic bloom that caused Florida Gov. Rick Scott to call a state of emergency in the nearby counties on June 29.