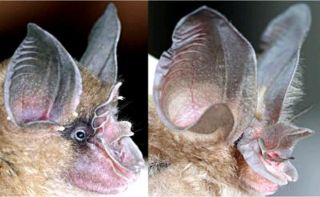 These images are of the noseleaf of a typical horseshoe bat species (left) vs. that of Bourret's horseshoe bat, the Rhinolophus paradoxolophus (right). Computer modeling indicates the extreme nose is used to create a highly focused sonar beam.
(Image: © Rolf Mueller)

Scientists may have solved the mystery of a bat with an extremely large nose, according to a new study. The oversized feature could help the bat sharpen its sonar.

The Bourret's horseshoe bat, or Rhinolophus paradoxolophus, was discovered 58 years ago in Southeast Asia and named for its strange facial trait. The bat has a roughly 9-millimeter-long nose (a third of an inch), while other species of horseshoe bats have a nose that is about half that size, said researcher Rolf Mueller, an associate professor of mechanical engineering at Virginia Tech and director of the Bio-inspired Technology Laboratory in Danville, Va.

"This nose is so much larger than anything else," among other bats of the region, Mueller said.

Bats use sonar, or ultrasonic beams, to detect their surroundings. They can listen to the echoes of these sound waves to get a picture of what's around them, a technique known as echolocation. Most bats emit sonar through their mouths, but the paradoxolophus bat sends out the beam through its nose.

Mueller and his team used 3-D computer models to compare varying sizes of bat noses, from small noses on other bats to the large nose of the paradoxolophus bat. The resulted showed that the elongated nose of the paradoxolophus helped to focus the sonar beam. If the nose was too short or too long, it was not able to focus the beam as effectively. The perfect length was the natural length.

Like a flashlight adjuster focuses a beam of light, the nose can focus the ultrasonic beam.

"We found that the natural nose length has a special value: All shortened noses provided less focus of the ultrasonic beam, whereas artificially elongated noses provided only negligible additional benefits," said Mueller.

Mueller worked on the study with engineers and scientists from China's Shandong University, where he held a professorship when the research project began, and the Vietnamese Academy of Sciences. The results will be detailed in the July 14 online edition of the journal Physical Review Letters.

In previous work on the rufous horseshoe bat, the same scientists demonstrated that grooves in the bats' elaborate nose structure cause different frequencies of sound to focus different ways.

The findings with the paradoxolophus bat are part of a larger study of approximately 120 different bat species and how they use sonar to perceive their environment. Set to finish in February 2010, it is hoped the study's focus on wave-based sensing and communication in bats will help spur groundwork for innovations in cell phone and satellite communications, as well as naval surveillance technology.