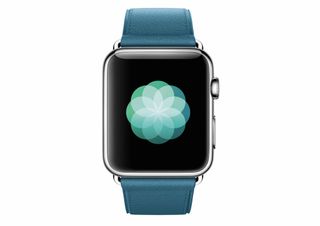 A new app for the Apple Watch, called Breathe, coaches you through breathing exercises.
(Image: © Apple)

A new app from Apple coaches you through breathing exercises, but do these exercises really help reduce stress?

This week, Apple announced a number of new features for the Apple Watch, including an app due out this fall called Breathe, which will "encourage users to take a moment in their day to do deep breathing exercises for relaxation and stress reduction," the company said in a statement.

The app will guide users though a timed breathing session, lasting 1 to 5 minutes. The watch can track a user's heart rate, and so at the end of a session, users will see a summary of their heart rate data, Apple said.

Studies suggest that deep-breathing exercises may reduce certain types of stress and anxiety, and can temporarily lower blood pressure. But many of these studies have been small, so more research is needed to learn more about the exact benefits of deep-breathing exercises, according to the National Center for Complementary and Integrative Health.

Deep breathing is a type of relaxation technique that is intended to counteract the body's normal response to stress, the "fight or flight" response. Deep breathing lowers heart rate and reduces levels of stress hormones, according to the NCCIH.

In addition, when you breathe deeply, you take in more oxygen, which may help improve your mental concentration and release endorphins that increase feelings of well-being, she told Live Science .

Focusing on breathing can also take your mind off stressful thoughts. "One of the ways of letting go thoughts of anxiety or stress is by focusing on our breathing," Harazduk said. [11 Tips to Lower Stress]

Studies show that deep breathing and other relaxation techniques may reduce anxiety in people undergoing certain medical procedures, such as breast biopsies or dental treatment, the NCCIH said. A 2013 study from researchers in South Korea found that burn patients who practiced breathing exercises had lower scores on measures of pain and anxiety when doctors treated their burns, compared with people who didn't practice the breathing exercises.

Deep breathing might also help with some day-to-day stresses. A 2013 study from researchers at Tufts University found that people who had anxiety about taking math tests performed better on the tests, and reported feeling calmer, if they practiced a breathing exercise beforehand.

However, breathing exercises by themselves may not be the best treatment for people with generalized anxiety disorder, a mental health condition in which people find it hard to control their anxiety, according to the NCCIH. Studies suggest that people with generalized anxiety disorder who are treated with psychotherapy do better than those who practice relaxation techniques alone.

And although breathing exercises can lower blood pressure in the short term, it's not certain how long these effects last. The Food and Drug Administration approved a device called Resperate, which helps people slow their breathing, to reduce stress and lower blood pressure. A review study conducted by the British Hypertension Society, which included nearly 500 patients, found that the device did lower blood pressure, by about 3.7 millimeters of mercury for systolic and 2.5 mmHg for diastolic blood pressure, on average.

But the longest-duration study in the review was nine weeks. The Society said that, because the effect was small and the studies were short, it could not recommend Resperate at this time.

Deep-breathing techniques should not be used as a replacement for conventional care, or to postpone seeing a doctor for a health problem, the NCCIH said.

The Breathe app will be available in the fall with the next update to the Apple Watch operating system, called watchOS 3.