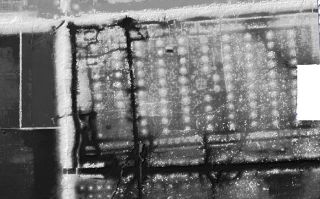 The scientists are puzzled as to what these vast "dome fields" (as archaeologists sometimes call them) would have been used for around 1,000 years ago, calling them "the most enigmatic features" from this archaeological landscape.

In addition to the dome fields, archaeologists also found mounds shaped into geometric patterns, such as spirals. These geometric features are located near Cambodian temple complexes, including examples found near Angkor Wat.

The finding is part of a huge project in which archaeologists with the Cambodian Archaeological Lidar Initiative (CALI) are targeting areas located near large temple complexes (such as Angkor Wat). Sizable cities often existed within and around these temples, and archaeologists have gradually uncovered these cities since the 1990s, Damian Evans, an archaeologist with the École française d'Extrême-Orient, wrote in a report published Monday (June 13) in the Journal of Archaeological Science. [See Photos of the Earthen Spiral Shapes Near Angkor Wat]

Many of the cities studied were part of the Khmer Empire, which, at its height in the 12th and 13th centuries A.D., "stretched across much of mainland Southeast Asia, with a network of highways connecting far-flung settlements to the Angkorian heartland in [what is now] Cambodia," Evans wrote. The empire was centered at the city of Angkor, where Angkor Wat is located.

The researchers used laser scanning equipment attached to low-flying helicopters in order to penetrate the thick foliage of the Cambodian jungle. Their work revealed earthen mounds and markings on the ground left over from decayed buildings made of wood and other organic material, Evans said.

The airborne scans, carried out in 2015, covered more than 735 square miles (1,910 square kilometers) of Cambodia. These scans revealed more information about the city of Mahendraparvata, which flourished more than 1,000 years ago, in the early years of the Khmer Empire. A scan in 2012 that mapped out 140 square miles (370 square km) of Cambodia had already revealed a sizable part of that city.

"Conventionally, the classical Angkorian period begins with the eighth- to ninth-century city of Mahendraparvata," located north of Angkor, Evans wrote in his paper.

Though Evans and his colleagues are still determining the size of Mahendraparvata, there is evidence that Angkor-period "archaeological topography," or the shape of the ground that appears to indicate a human presence, covers 15 to 20 square miles (40 to 50 square km), he said. [Images: Lost Medieval City Discovered Near Angkor Wat]

Much of that archaeological topography consisted of grid-like arrangements of mounds, Evans said. Similar dome fields have been found in other parts of Cambodia.

The purpose of these dome fields is unknown. "Surface surveys and excavations of these mounds have revealed little of archaeological interest, and they remain among the most enigmatic features of Khmer landscape archaeology," Evans wrote.

"They're an interesting problem," said Roland Fletcher, a professor at the University of Sydney who works with Evans but didn’t co-author this particular study.

"Equally enigmatic are the geometric rectilinear patterns made from earthen embankments and variously described as 'coils,' 'spirals,' 'geoglyphs' or 'gardens,'" Evans wrote.

These spiral-shaped features were discovered in 2012 south of Angkor Wat's moat and in the more recent survey at two other sites in Cambodia called Beng Mealea and Preah Khan of Kompong Svay.

"Excavations of these linear features at Angkor have also revealed little of archaeological interest, and their function remains unclear," Evans wrote.

The geometric features were constructed using different designsand are located beside water sources near the temple complexes, Fletcher said. The designs vary; for instance, the features near Angkor Wat look more like spirals, whereas the designs at Preah Khan of Kompong Svay are mostly made of straight lines.

"Since the features do mechanically resemble well-known raised fields elsewhere, my inclination has always been to view them as a horticultural system of some sort for specialized plant production," Fletcher said.

Archaeologists were also surprised to find the remains of a city at the site of Preah Khan of Kompong Svay. The geometric patterns are just one part of that urban landscape.

However, the new airborne laser data "clearly show an urban layout within the central moat of the site," which is "surrounded by an extended, less-organized urban grid," Evans wrote. That suggests that the site contained a sizable populationhe noted.

Archaeologists are continuing to analyze the airborne laser data and are conducting more fieldwork in Cambodia. More results will be published in the months and years ahead, the researchers said.