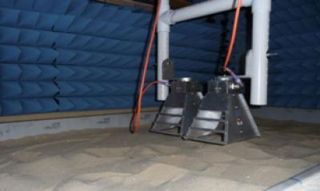 This is an early prototype of S&T's ground penetrating radar on display at a demonstration this spring. Engineers tested the technology in a giant sandbox to simulate conditions along the southern US border.
(Image: © DHS S&T)

Radar technology could help U.S. border patrol agents spot underground tunnels dug by human smugglers and drug traffickers along the border, according to the Department of Homeland Security. Tunnel diggers have been hard at work along the U.S. border in recent days and months, the agency knows. Of every tunnel ever found by a patrol agent, 60 percent were discovered in the last three years, and patrollers spot a new one every month. But "all of them have been found by accident or human intelligence," said Ed Turner, a project manager with the U.S. Department of Homeland Security (DHS) Science and Technology Directorate. "None by technology." That's about to change, the agency stated this week. The DHS is working with Lockheed Martin to develop a ground-penetrating radar technology that would be designed specifically for finding underground tunnels. If successful, the tool will help agents locate and plug tunnels almost as fast as they can be dug. The technology would consist of radar antennas placed in a trailer that would be towed by a patrol truck. The antennas send signals into the ground and use them to formulate a multi-colored picture of the earth. The tunnels show up as colored dots which agents would see on a monitor. It's not really rocket science. Ground-penetrating radar is already used by civil engineers to look beneath the surface. But they usually want to detect cables or pipes that may be only a few meters underground. Border patrol agents need to find tunnels that often are much deeper. Their radar technology will use much lower frequencies that penetrate deeper, as well as sophisticated new imaging that can display clear pictures of deep tunnels. The Lockheed Martin team had a demonstration of an early scale model prototype this spring. And this summer, they will test out the technology on the U.S. Southwest border to see if it can separate tunnels from rocks, plants and other objects along the ground. The work, called the Tunnel Detection Project, is part of the Homeland Security Advanced Research Projects Agency, an office within the DHS Science and Technology Directorate.