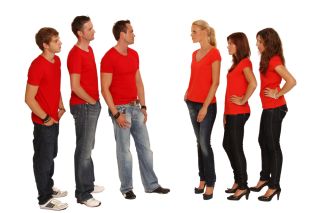 When men and women work together, their brains may not take the same approach to cooperating, a new study suggests.

In the new study, the areas of the brain that lit up were synchronized when two guys worked together to do a task, and when two women did, although the areas were different in men and women. In pairs where there was one man and one woman, the brain activity didn’t sync up.

More than 50 years of research has shown that men and women have different ways of cooperating, according to the study, published today (June 8) in the journal Scientific Reports.

"It's not that either males or females are better at cooperating, or can't cooperate with each other. Rather, there's just a difference in how they're cooperating," Dr. Allan Reiss, a professor of psychiatry and behavioral sciences at Stanford University School of Medicine, and the senior author of the study, said in a statement.

In the study, the investigators wanted to understand what happens in the brain when men and women cooperate to cause these differences. [10 Things You Didn't Know About the Brain]

They did brain scans on 111 pairs of participants, who were asked to cooperate with each other to complete a computer task. In 39 of the pairs, both participants were men; 34 pairs had one man and one woman; and 38 pairs had two women. None of the participants knew each other before the experiment, the researchers noted.

During the computer task, the people in the pair each looked at a computer screen, and when a circle on the screen changed color, they had to press a button. The goal was to press the button at the same time as their partner, but the participants in the pair couldn't talk to each other, and they could not see their partner's computer screen. The pairs were given 40 tries to synchronize their timing, according to the study. After each attempt, they were told who pressed the button sooner, and how much sooner they did so.

The researchers used a brain-imaging technique called "hyperscanning" to measure each person's brain activity during the task. Unlike other forms of brain imaging, hyperscanning can be done while the participants are sitting upright and moving.

Indeed, earlier brain scan studies on two cooperating people have found that the brain activity of both individuals appears to sync up, the researchers wrote in their study.

In the new study, the researchers said, the areas of the brain where activity was synchronized was different in the male/male pairs, compared with the female/female pairs.

In contrast, in the mixed-sex pairs, the researchers did not observe such synchronization of brain activity, which further suggests that each sex uses different cognitive strategies when it comes to cooperation, the researchers wrote. [10 Things Every Woman Should Know About a Man's Brain]

The study is an early finding in this field and that more research is needed to fully understand the underlying brain mechanisms of cooperation, the researchers said. And they studied only one type of task for cooperation, but it's possible that different tasks could yield different results, they wrote.

These findings may shed light on how male and female brains evolved for different tasks, according to the study. For example, others have hypothesized that the male's history of hunting and warfare may have resulted in evolutionary differences in how men cooperate with one another, the researchers wrote.

In addition, the findings may also be helpful for people who have trouble interacting with others, such as those with autism. "People with autism have problems with social cognition," Baker said. The researchers hope to learn more about the neurology of cooperation so that they might be able to design more effective therapies for people with autism, he said.