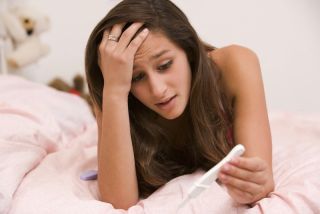 Teen birthrates in the U.S. hit an all-time low again in 2015, a new report on preliminary data finds. The teen birth rate has declined almost continuously over the past two decades, according to the federal statistics.

The 2015 birthrate was a 64 percent decrease from the rate's peak in 1991, at 62 births per 1,000 teens, according to the report, published today (June 2) by researchers at the CDC's Center for National Health Statistics. [7 Ways Pregnant Women Affect Babies]

There are likely several reasons why the rates of teen births have dropped, said Dr. Iffath Hoskins, a clinical associate professor of obstetrics and gynecology at New York University Langone Medical Center, who was not involved with the report.

Health care providers and educators have taken a multipronged approach to teen pregnancy, including increasing the availability of contraception to teens and improving education about the subject, Hoskins said. And because experts will continue to use these approaches, the rates should continue to decline, she said.

Hoskins noted that making certain forms of contraception — such as intrauterine devices (IUDs), hormone injections and lower-dose birth control pills — easier to use and more available to younger patients has been very beneficial.

In addition, education about teen pregnancy has improved and become more science-based, focusing on informing teens about the effects that pregnancy has on a growing teenager, Hoskins said. Education goes beyond explaining the emotional and financial tolls of teen pregnancy — it's also imperative to explain the physical effects.

For example, teenage girls are still growing and developing, and when nutrients such as calcium and iron are diverted to a growing fetus, there is less available for the teen's needs, she said. And the increases in levels of estrogen and progesterone that come with pregnancy can have negative effects on a body that is still developing, she said.  [10 Facts Every Parent Should Know About Their Teen's Brain]