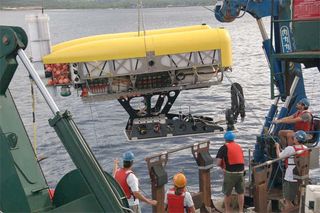 The hybrid remotely operated vehicle Nereus may be tethered or untethered to a mother ship.
(Image: © WHOI)

A robotic vehicle named Nereus has made one of the deepest ocean dives ever — 6.8 miles (10,902 meters), a team of scientists and engineers reported yesterday. At this depth, Nereus was able to explore the Challenger Deep — the ocean's lowest point, located in the Mariana Trench in the western Pacific.

Nereus took the plunge Sunday. It was the first exploration of the Mariana Trench since 1998.

"Much of the ocean's depths remain unexplored," said Julie Morris, director of the National Science Foundation's Division of Ocean Sciences, which funded the project. "Ocean scientists now have a unique tool to gather images, data and samples from everywhere in the oceans, rather than those parts shallower than 6,500 meters (4 miles). With its innovative technology, Nereus allows us to study and understand previously inaccessible ocean regions."

Remarkably, two men reached the bottom of the trench in 1960 in a feat never repeated. Swiss oceanographer and engineer Jacques Piccard and Lt. Don Walsh of the United States Navy descended to 35,797 feet (10,911 meters) in a bathyscaphe designed by Piccard.

Nereus is a new type of ocean vehicle, called a hybrid remotely operated vehicle (HROV). It is controlled by scientists aboard a surface ship via a fiber-optic tether. In addition to being able to dive deep, Nereus can also switch to a free swimming mode.

"The team is pleased that Nereus has been successful in reaching the very bottom of the ocean to return imagery and samples from such a hostile world" said Andy Bowen, project manager and principal developer of Nereus at the Woods Hole Oceanographic Institution (WHOI). "With a robot like Nereus we can now explore anywhere in the ocean. The trenches are virtually unexplored, and Nereus will enable new discoveries there."

Nereus has a lightweight tethering system. A traditional system uses steel-reinforced cable made of copper that powers a vehicle, and optical fibers that enable information to be passed between the ship and the vehicle. But if such a cable were used to reach the Mariana Trench, it would snap under its own weight before it traveled that deep. To solve the problem, the Nereus team adapted fiber-optic technology developed by the Navy's Space and Naval Warfare Systems Center Pacific to carry real-time video and other data between the Nereus and the surface crew. Close to the diameter of a human hair and with a breaking strength of only 8 pounds, the tether is composed of glass fiber with a very thin protective jacket of plastic. WHOI engineers also developed a hydraulically operated, lightweight robotic manipulator arm that could operate under intense pressure. Overall, the deep-diving vehicle weighs nearly 3 tons in air and is about 14 feet (4.25 meters) long and about 8 feet (2.3 meters) wide. It is powered by more than 4,000 lithium-ion batteries. During its dive to the Challenger Deep, Nereus spent more than 10 hours on the bottom. It sent live video back to the ship through its fiber-optic tether and collected biological and geological samples with its manipulator arm. "The samples collected by the vehicle include sediment from the tectonic plates that meet at the trench and, for the first time, rocks from deep exposures of the Earth's crust close to mantle depths south of the Challenger Deep," said geologist Patty Fryer of the University of Hawaii, who also went on the expedition. "We will know the full story once shore-based analyses are completed back in the laboratory this summer. We can integrate them with the new mapping data to tell a story of plate collision in greater detail than ever before accomplished in the world's oceans." Nereus was also funded by the Office of Naval Research, the National Oceanic and Atmospheric Administration, the Russell Family Foundation and WHOI.

Editor's note: This story has been updated to reflect that fact that Nereus' dive to the Mariana Trench did not set a depth record. We've also added mention of the historic journey by Piccard and Walsh.