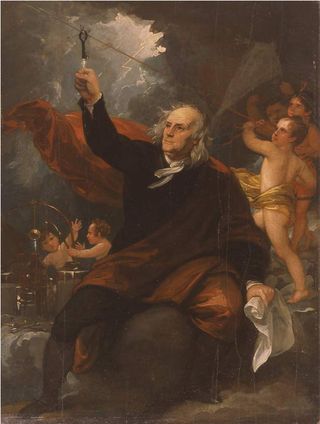 Benjamin Franklin is known for, among other things, Drawing Electricity from the Sky, which is the title of this Benjamin West painting at the Philadelphia Museum of Art.
(Image: © GPTMC)

For many, the iconic image of Benjamin Franklin involves a kite, key, and bolt of lightning.

Today, on the 300th anniversary of his birth, the statesman is celebrated as much for his scientific achievements as for the signature on the Declaration of Independence in 1776.

A keen observer of nature throughout his life, Franklin by the age of 42 had amassed enough personal wealth from his printing business that he was able to retire and pursue his love of scientific research full time.

Franklin would prove himself as one of early America's greatest and most prolific minds, famously inventing the lightning rod, the odometer, and bifocal glasses, among other things. According to most historians, it was this dedication to improving the overall quality of life with practical invention that is his lasting legacy.

"In the 1700s, a scientist was someone who thought about the way things work and tried to figure out ways to make things work better." That's how curators of the Franklin Institute, the organization in charge of the science museum that also bears his name, put it. "Every time Ben Franklin saw a question and tried to answer it, he was a scientist."

The following is just a sample of Franklin's quirkier brainstorms. Perhaps not as famous as his theories on electricity or the Gulf Stream, their purpose was to add some enjoyment to life.

Franklin loved music, playing and composing it himself. On one of many trips he would take to England he saw a performer play a tune by stroking the rims of water glasses, each a different size and filled with varying amounts of liquid. Intrigued by the concept, Franklin set about creating a more structured version of the rim trick. With a glassmaker's help, the armonica was born. A wooden stand propped up 37 glass hemispheres on a rotating rod, which Franklin ran moistened fingers along to produce a variety of notes depending on the thickness of the glass. Both Mozart and Beethoven would eventually compose classical pieces specifically intended for the instrument.

An avid swimmer, Franklin was drawn to water at a young age and consistently promoted the healthy benefits of the exercise in his later writings. At the ripe old age of 11 he invented a pair of fins that, unlike today's modern flippers, were strapped to the swimmer's hands to help make each stroke more efficient. His contributions to the sport led to his posthumous induction into the International Swimming Hall of Fame.

Spending an inordinate amount of time among the stacks at the library he founded in Philadelphia, Franklin was inclined to improve the simple devices he used while enjoying his books. First, he converted a regular library chair into a multi-functional appliance that could be sat on or used as a small ladder. For those books still out of reach, Franklin devised an extendable "arm" with fingers that opened and closed by pull cord.

January is Genius Month at LiveScience.

Vote for the Greatest Modern Mind