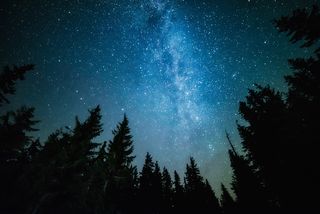 After a long a long day of photosynthesizing, do trees fall asleep?

It depends on how you define "sleep," but trees do relax their branches at night, which might be a sign of snoozing, scientists said.

In the only reported study to look at tree siestas, researchers set up lasers that measured the movements of two silver birch trees (Betula pendula) at night. One tree was in Finland and the other in Austria, and both were monitored from dusk until morning on dry, windless nights in September. This was close to the solar equinox, when daylight and nighttime are about equal. [What Is the Oldest Tree in the World?]

The laser scanners used infrared light to illuminate different parts of the tree, each for fractions of a second. This provided enough detail to map each tree within minutes, the researchers said.

The silver birches' branches and leaves sagged at night; they reached their lowest position a few hours before sunrise, and then perked up again during the wee hours of the morning, the researchers found.

"Our results show that the whole tree droops during night, which can be seen as position change in leaves and branches," study lead author Eetu Puttonen, a researcher at the Finnish Geospatial Research Institute, said in a statement. "The changes are not too large, only up to 10 centimeters [4 inches] for trees with a height of about 5 meters [16 feet]."

It's unclear if the sun "woke up" the trees or if they relied on their own internal circadian rhythm, the researchers said. But "the fact that some branches started returning to their daytime position already before sunrise would suggest this [internal circadian clock] hypothesis [is right]," the researchers wrote in the study, which was published online on Feb. 29, 2016, in the journal Frontiers in Plant Science.

The famed botanist Carl Linnaeus (1707-1778) found that flowers confined to a dark cellar still opened and closed, and naturalist Charles Darwin (1809-1882) noted that the nocturnal movement of leaves and stalks on plants looked like sleep.

However, their studies concentrated on small plants grown in pots. The finding in trees represents the first study to use lasers to precisely measure the nighttime movements of wild trees, the researchers said.

The tree study didn't address why the branches and leaves drooped at night, but it's likely related to the turgidity, or the internal water pressure within the tree, the researchers said.

"Plant movement is always closely connected with the water balance of individual cells, which is affected by the availability of light through photosynthesis," said study co-author András Zlinszky, a researcher at the Centre for Ecological Research at the Hungarian Academy of Sciences. [How Tall Can Trees Grow?]

The researchers said in the future, they plan to examine the water movement within each tree and compare it to measurements made by the laser scans. "This will give us a better understanding of the trees' daily tree water use and their influence on the local or regional climate," Puttonen said.