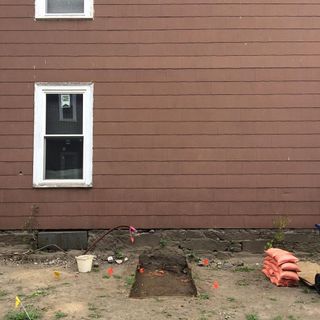 In May 2016, ahead of planned restoration work at the Malcolm X House in Boston, excavators conducted an archaeological investigation.
(Image: © City of Boston Archaeology Program)

The boyhood home of influential black activist Malcolm X has turned out to be a fascinating archaeological site.

An excavation at the house in Boston's Roxbury neighborhood ended last week. In trenches around the home's foundations, archaeologists unearthed thousands of artifacts, including a vinyl record of American folk songs from the 1950s, as well as toys and housewares from Malcolm's lifetime. They also discovered the remains of a previously unknown 18th-century home.

The house, located at 72 Dale Street, was built in 1874 and has been owned by Malcolm's family since the 1940s. Malcolm lived there with his older half sister Ella Little-Collins after his father died and his mother was institutionalized. Rodnell Collins — Ella's son, who owns the house today — plans to restore the home, possibly to turn it into apartments for graduate students studying civil rights, social justice or African-American history, according to the National Trust for Historic Preservation. But before work could begin on the foundation, archaeologists had to conduct an investigation because of the home's landmark status. [See Photos of the Dig at Malcolm X's Boyhood Home]

"One of our first surprises was that there was a lot more from Malcolm and Ella's time period than we thought there was going to be," said Joe Bagley, an archaeologist with Boston's City Archaeology Lab who finished digging Friday (May 20). One of the reasons for this, Bagley suspects, is that in the 1970s, the home was vacant and it was vandalized. The windows were broken, and a lot of the home's contents were tossed out and left in the yard. That was bad for the house, but good for archaeology, Bagley said.

"I wish it hadn't happened, but we're recovering a lot of materials that were in the house that the family hadn't seen since the looting in the '70s," Bagley told Live Science, adding that Rodnell Collins has been able to identify toys that he played with and pieces of his mother's mixing bowl. "What I think we're really going to find is, Ella's story more than Malcolm's story here. She was the one who bought most of the materials in the house."

Before Ella bought the house, at least three different families of Irish descent lived at 72 Dale Street, but they left little trace in the archaeological record, Bagley said. Surprisingly, the excavators discovered a foundation for a previously unknown structure and a hoard of artifacts from the 18th century, including clay wig curlers and expensive ceramics that indicate there was a wealthy person's home there more than 200 years ago.

"We're finding thousands of artifacts from at least 100 years before the house was built," Bagley said. "All of our research indicates that there was no previous house on this property at all. So despite what the records say, there's definitely another house here."

Bagley's team also has been using social media to crowdsource, in real time, information about mystery artifacts found on the site. For example, they posted a picture of a broken gold, plastic disc found at the site, and within minutes, someone had identified it as a trading stamp token from a store called Sav-A Coin in South Carolina.

"That would have taken me forever to identify," Bagley said.